Starting from the remote Karl Schuster bivouac hut and taking you over 2 peaks in the heart of Austria's most remote mountain range, this is a serious but rewarding day which any mountaineer would enjoy. The route involves a huge amount of micro route finding and the "paths" you follow are vague throughout the day, so save this one for a perfect blue sky day - getting lost anywhere in the vicinity of these peaks would be a serious situation.

Leave the Karl Schuster bivouac hut behind and start your day with an easy return trip up the Laliderer Spitze. Summiting the mountain only takes 40 minutes or so as a return trip from the hut so you can travel very light and leave most of your kit at the hut. The hike up is strenuous and takes you across some loose scree, but it's so short that it doesn't feel too tough.

The view from the top is fabulous, with the famous peaks of the Stubai and Ötztal valleys clearly visible, and the giant summits of the Höhe Tauern range (including Gross Glockener - Austria's highest mountain) off in the distance. The view to the north is incredibly dramatic too, with the Laliderer Spitze's vertical north face dropping away beneath you, and the summits of the northern Karwendel and Bayerische Alps in the foreground, and the plains of southern Germany beyond.

Having taken it all in, return to the hut, pick up your kit and follow a vague path east-southeast over a small col and then across a long, steep scree slope to the foot of the Dreizinkenspitze's summit tower. The path over to the summit tower is marked with the occasional cairn but it's still tough to follow and even when you can find it, it's not much different to walking on scree without a path, so make sure you're steady on your feet and used to long periods of unstable terrain before tackling this route.

Once below the summit tower, head up to a short, steep gully on its lefthand side and climb this via some easy but loose scrambling, a short section of via ferrata staples and finally an exposed but straightforward shuffle along a ledge system to the peak's summit cross. Like the Laliderer Spitze, the Dreizinkenspitze enjoys a wonderful view in all directions so take some time to savour it before your return to civilisation.

Descend back down the gully to the scree slope and then drop down a steep path marked with red paint dashes to a col south-east of the Dreizinkenspitze's summit tower. From here, follow a vague - but well marked - path down a gully which descends almost due south. The path is rocky and requires constant concentration so the descent feels rather tiring despite being relatively short. Finding the paint marks which denote the route would be incredibly difficult in bad visibility (or in the dark) so - again - save this route for a perfect day.

Keep on descending until the vague path meets the track coming down from the Grubenkarpsitze and instantly becomes much clearer. If you are racing daylight and make it to this path junction, you should be fine and ought to be able to descend safely from this point by headtorch.

Follow the path down to the bike depot and then blast out to Scharnitz in less than one hour of saddle time! 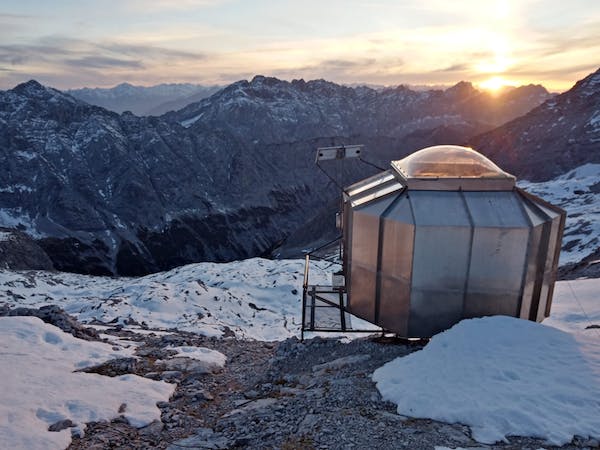