This is about as good as low grade mountain adventures get because it combines several sports, varied mountain scenery and a couple of excellent summits.

Start out in the hamlet of Sankt Sigmund im Sellrain and follow the large jeep track south out of the village. It's possible to hike up the jeep track but it's much better to bike up it, not because it makes the ascent much quicker but because it speeds up the descent hugely. The jeep track can be awkward to cycle up but even if you have to push your bike at times, it will be worth it at the end of the day!

The track ends when you reach a small hut which is the base station for a tiny supply-carrying cable lift. The lift sends supplies up to the Pforzheimerhütte but (sadly) doesn't transport people! Leave your bikes at the little hut and then walk for half an hour up to the Pforzheimerhütte itself, which serves up the traditional Austrian fare of hearty food and cold beer.

From the Pforzheimerhütte climb up to the Gleirschjöchl col and then turn right and follow a path marked by red dots to reach the summit of the Gleirscher-Roßkogel.

Go north from the summit and follow the lovely ridge crest to the Zwieselbacher Rosskogel. The ridge itself is well marked with red dots but there are countless little variations you can take, none of which should involve anything tougher than grade 2 scrambling. There is one particularly enjoyable section of slabs below the Zwieselbacher Rosskogel's summit but the rest of the terrain is blocky ridge scrambling.

From the Zwieselbacher Rosskogel head north and then follow a good path as swings around to the south-east, passing a stunning high mountain lake en route, and takes you back to the Pforzheimerhütte. From here, descend back to your bikes, roll down the jeep track and back into Sankt Sigmund. 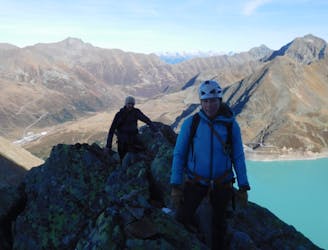 A spectacular 380 metre scramble up the north ridge of the Zwölferkogel, a peak just under 3000m in Austria’s highest ski resort. 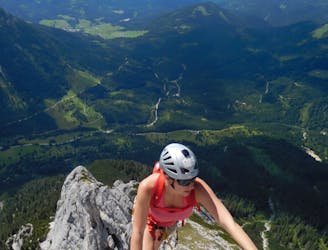 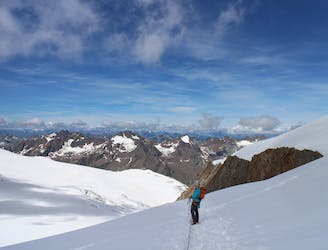 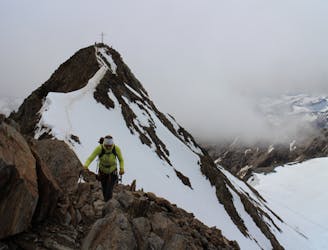