A major glaciated face off the north side of Slalok Peak directly down to Upper Joffre Lake.

The Stonecrop Face on Slalok is a massive face visible from the Duffey Lake Road with 1,090 m of vertical loss from the summit to Upper Joffre Lake!

Approach via the Joffre Lakes Trail to the Third Lake. The Matier Glacier can be accessed on the left or right side of the icefall depending on conditions. This route shows the right option but the left is shown in the route tracks for the Aussie Couloir and Matier NW Face. It is not recommended to boot directly up the Stonecrop Face as it is entirely possible for a party to approach from behind and drop in on from the top without seeing parties below.

From the Matier Glacier, traverse out onto the lowest notch on the NNE Ridge of Slalok Mtn. This may involve steep skinning or booting to gain the ridge. Continue booting up the ridge proper to gain easier slopes and the summit plateau.

Many skiers start from the saddle just below the true summit. The summit itself is a short (30m) rock step that does sometimes fill in with snow by mid-winter.

For the descent, watch for wind slab at the start of the line. It is steepest at the top and the exposure becomes less and less as you descend.

The middle of the face is glaciated and may have both crevasses and exposed ice. The easiest and safest line is skier's left.

The lower half of the face is exposed rock due to glacial recession. It is possible to stay skier's left however the simplest option is to start working to the middle of the face where it funnels into a bit of a couloir. This is the most fall line option with minimal billy-goating around rocks. In early season, an interesting variation is to continue working skier's right below the ice lobe to a tighter couloir break in the rocks.

All options are best scoped from Upper Joffe Lake on the approach! The Stonecrop Face is also an interesting option for late spring skiing when the Joffre Lakes Trail is melted to the upper lake and the face can be climbed directly with crampons on summer neve. 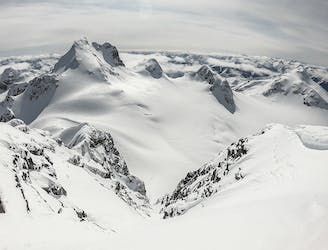 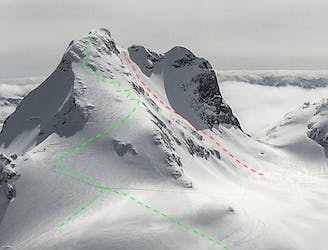 A wide open face on the crown of the Matier group. 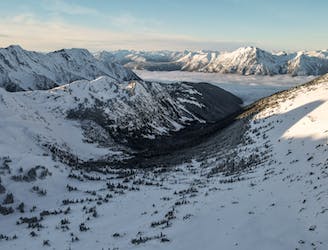 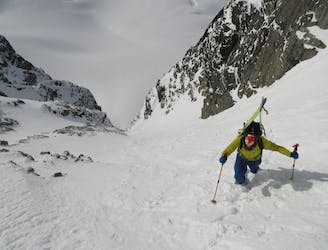 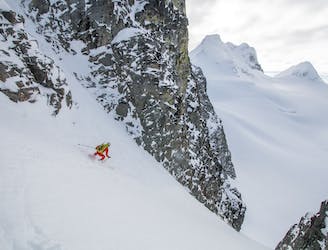