A gorgeous day, the highlight of which is a lovely north facing bowl beneath the Pointes des Sagnes Longues.

With relatively little distance to cover today, an alpine start is not required, but still aim to get out of the Refuge de la Blanche at dawn so as to enjoy the sunrise, which is epic from the hut when the weather is good.

Traverse due north from the hut, holding an altitude of around 2500 metres to the foot of a blunt rib descending from the Pointes des Sagnes Longues' West ridge. Skin up the skier's righthand side of the rib and then up the West ridge itself to reach the summit of the peak. From the top you'll be able to see your entire ascent route, and the valley where you will spend the night in the Refuge Agnel.

Ski west off the summit briefly and then drop north-west into an absolutely gorgeous, broad gully. There is often really good snow in the gully and it's incredibly fun to ski. Follow it all the way down into the trees and ski through these to the foot of the Agnelle valley.

Cross the river at the foot of the valley and then skin up a track (which in summer is a road) to the Refuge Agnel, which is another cracking place to spend a night. Once again there are numerous options for a quick afternoon tour so if you have time and energy left over you'll be spoilt for choice of places to go exploring before returning to the hut for dinner. The hut is actually perched just below the Franco/Italian border, so you might even choose to nip into a different country during the afternoon!

It's possible to do the 3rd day of the Queyras traverse after 1 night in the Refuge Agnel but if you have time, it's recommended to spend 2 nights at the hut and do the Circumnavigation of the Pain de Sucre as a day tour.

Circumnavigation of the Pain de Sucre 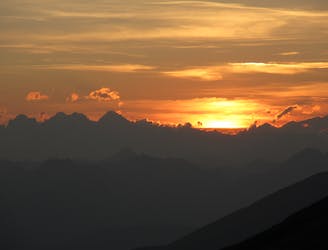 4 cols in 2 countries and some great skiing around a stunning mountain! 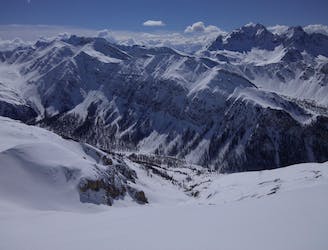 A long and rewarding day which can be shortened if required. 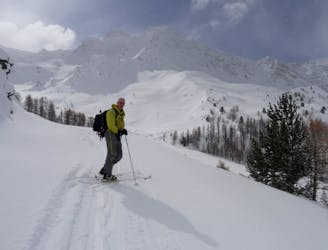 A classic couloir combined with epic views make this a classic day.

Peaceful Ski Touring: The Traverse of the Queyras