A stroll around Hampstead Heath and surrounding historical gems, including a very famous pub.

Hampstead Heath is a sprawling expanse of meadows, hills, and woods, with a rich history and a very special character. Rambling paths crossing vast grassy spaces, Bathing Ponds where Londoners take a dip outside year-round, and Parliament Hill, which affords walkers with magnificent views across London, all add to the Heath’s charm. It’s also home to a plethora of wildlife, including bats, foxes, hedgehogs, and even a flock of flamingos. The surrounding neighbourhood boasts many places of historical significance, as well as cosy pubs and cafes to welcome you in after a day’s stroll.

This walk is a 5-mile circular route around Hampstead Heath and its surrounding historical highlights. There’s also an option to extend the walk by a couple of miles in the middle to take you to the nearby Highgate Cemetery, where Karl Marx and many other people of historical significance are buried. Follow the asterisks in the route description below for the additional extended route directions.

Begin at Hampstead Underground Station. Turn left as you come out of the station and head down Hampstead High Street. Take the first left down the signed Flask Walk and at the junction with the Burgh House museum, turn right to cross the end of Gayton Road, descending down Willow Road. At the very end, you’ll come to No 2. Willow Road, built by Ernö Goldfinger in 1937-9, a controversial design that is considered to be one of the most important modernist buildings in Britain, now owned by the National Trust and open to the public.

At the end of the road turn left into Downshire Hill, and cross East Heath Road to enter the Heath. Almost immediately, turn right downhill on a broad track, then left to reach the corner of the first of the Hampstead Ponds. There are a total of around 30 ponds in and around the Heath, originally dug in the 17th and 18th centuries to meet London’s growing water demands.

Follow the path on the left edge, which will lead you to and around the No 2 Pond, and on to the Mixed Bathing Pond, where you can stop for a quick dip—weather permitting!

Continuing on, the path will begin to climb up to one of the best lookout points in London: Parliament Hill. Formerly called Traitor’s Hill, Parliament Hill went through a name change after it was used as a defence point during the English Civil War for troops loyal to parliament. At the summit, enjoy the wide panorama over central London to the south.

Sticking to the same path, fork left at the cross-path to descend to a T-junction near the corner of the Highgate Ponds. Turn left here and take the hard-surfaced path. Continue past two ponds. At the next junction, turn right on a cross-path and, in 20 metres, right again at a second cross-path, to take the raised path, which gives good views over the Model Boating Pond on your left and the Men's Bathing Pond on your right.

Bear left around the raised bank, eventually arriving at the end of the pond. Turn right along the path, then at the branch take the second path on the right by railings, following around to the left of a toilet block into Millfield Lane. Go along Millfield Lane, which passes alongside woods and even more ponds, including the ladies-only bathing pond. Eventually, the lane comes into a clearing and follows the boundary fence of Kenwood on the left. When you reach Millfield Gate on the left, go through to join a path running parallel, and follow this to Kenwood House, the large mansion ahead of you. Kenwood House is an English Heritage site, it's free to enter and houses an astounding art collection, including works by Rembrandt, Vermeer, Turner, Gainsborough, and Reynolds.

Pass through an ivy arch at the left corner of the house and enter a path on the left with overhanging shrubbery. At the end of the lawn, you’ll spot Barbara Hepworth’s “Monolith-Empyrean” on the left. The path eventually leads to a wide terrace, where you swing right, passing Henry Moore’s sculpture, “Two Piece Reclining Figure No 5” at the edge of a large field. Follow this path downhill around to the Wood Pond in the valley bottom. You will have come in a wide semicircle, with Kenwood House grandly perched on its hill to your left.

Continue over Stone Bridge and immediately turn right into the woods, keeping by a wire fence overlooking a shallow valley on the right. Take the second gate on the right, turning left downhill, left again around a tight bend, then take the next path on the right through trees (i.e. the narrowest path at this complex junction). Cross Bird Bridge at the bottom of the hill and turn left at the T-junction ahead, shortly after arriving at the picturesque Viaduct Bridge.

Now retrace your steps past the previous junction, this time continuing straight ahead, where there should be a deep valley visible to your right. Continue on the rising main path, swinging left on reaching the top of the hill. A little way along the level path, divert left to take a parallel earthen path running along the edge of the hill. From here, enjoy the views over the Vale of Health to central London. Continue on the same path, bearing right through a patch of woodland, and eventually ascending steps to emerge on Spaniards Road.

Turn left and continue in the same direction to cross Whitestone Walk, keeping Whitestone Pond and the flagstaff on your right. Cross West Heath Road and go forward into the very fine Hampstead Grove, following it along until it turns into Holly Bush Hill. Swing left here, passing Holly Bush Pub, a local's favourite watering hole dating back to 1896. There's a great real ale selection, home-cooked food, and even a ghost!

A few metres past the pub, take the steps down a wide passageway on the left to reach Heath Street. Turn right after 100 metres to return to Hampstead Underground Station.

To tack on the famous Highgate Cemetery and extend your walk by a couple of miles, follow these instructions, which eventually join back up with the original route described above and drawn on the map. From Millfield Lane, at the toilet block, take the path on your right to Merton Lane, cross Highgate West Hill, turning left and keep climbing until you hit South Grove, staying right and passing by St Michael’s Church (1831), the Old Hall (c1691) and Pond Square Chapel (1859).

Twenty-five metres further on, turn down Swain’s Lane, entering Waterlow Park after another 50 metres. Keep downhill close to the park boundary until you reach a gate on the right. Go through this to find the main entrance to Highgate (Western) Cemetery. The entrance to the Eastern Cemetery, where Karl Marx is buried, is a few paces further down on the park side of the road.

Highgate Cemetery is the resting place of Karl Marx, George Eliott, Douglas Adams, George Michael, and many other people of cultural and historical significance. The grand Victorian design, tranquil atmosphere, and sheer expansiveness make Highgate Cemetery a special place to visit and well worth the 12-pound admission fee. Note that visitors are allowed to roam freely in the Eastern Cemetery, but the western side is strictly guided tour only, which you are recommended to book ahead.

Return to Waterlow Park through the same gate and take the major path winding left up the hill. Pass between two lakes, then turn left in front of the high brick wall. The second gap in the wall gives access to Lauderdale House, which contains a café and toilets. Otherwise, continue on to pass Waterlow’s statue, where you can stop and enjoy the expansive views across London. Turn right at the T-junction, keeping right to exit the park at Highgate High Street. Turning left, walk to the end of the street, which is awash with charming cafes and pubs.

Cross over South Grove and West Hill, Passing the Gatehouse Theatre-pub on the left. Now turn left down Hampstead Lane and take the first left onto The Grove, before sharply turning right into Fitzroy Park. Follow this road all the way down, passing allotments on the right. Then turn left with the road at the foot of the hill. You’ll eventually arrive at the foot of Merton Lane. Turn sharply right into Millfield Lane, arriving back at the place you left the main trail.

Add a short walk onto the end to the iconic Spaniard's Inn pub. In their own words, this pillar of North London was "Built in 1585 as a tollgate on the Finchley boundary, The Spaniards has more than a few tales to tell. This characterful inn was named after the Spanish Ambassador to James I of England and rumour has it highwayman Dick Turpin was born there, whilst his father was landlord in the early 1700s. Immortalised by Dickens in The Pickwick Papers, and allegedly the place in which Keats penned ‘Ode to a Nightingale’, The Spaniards has a romantic, nostalgic air and a feeling of time stood still." https://www.thespaniardshampstead.co.uk/venue 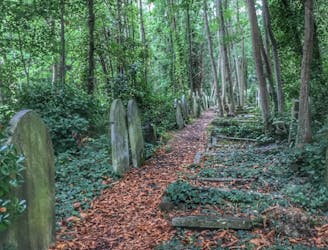 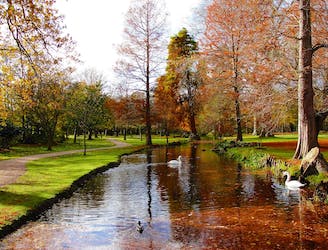 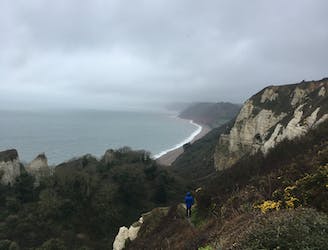 5 Excellent Pub Walks in the UK