"Oracle State Park is a 4,000 acre wildlife refuge in the northern foothills of the Catalina Mountains," asserts the park website. Here, you'll also find "day-use picnic areas and over 15 miles of trails for use by hikers, mountain bikers and equestrians." Even though a section of the Arizona Trail crosses the park, the trails here seem to be more of an afterthought than the primary purpose of the park. The primary purpose does appear to be the wildlife habitat, and you can enjoy that wildlife thanks to these after-thought trails and this loop hike through the park.

While Oracle State Park is surrounded by a harsh desert landscape, the park itself lies on a series of low foothills and ridges below the Catalina Mountains. Seasonal streams flow through the bottoms of the narrow, steep-sided valleys of the park, and those valleys provide protection that allows a variety of trees and undergrowth to thrive. These long, narrow oases provide a beautiful habitat for all manner of wildlife to thrive.

According to the park, "the most commonly sighted mammals include Coues white-tailed deer, coyote, bobcat, javelina, gray fox, cottontail rabbits, all four Arizona skunks (white-striped, spotted, hooded and hognose), many other small mammals, and an occasional mountain lion.

"Reptiles include a variety of snakes and lizards featuring the western diamondback rattlesnake and clark’s and desert spiny lizards, western fence lizard, giant spotted lizard and several others. The Gila monster and desert tortoise can also be seen."

The loop mapped here is one of the longest loop hikes through the park. The trails traverse several different valleys, and subsequently scale the sides of the arroyos to reach elevated vantage points, providing views over the entire region. Then the trail will inevitably drop back down into another valley, and repeat ad nasueum. It is possible to cut this loop and make it a shorter hike thanks to one of the many connector trails that bisect the park, or to simply complete an out-and-back on a portion of the loop. 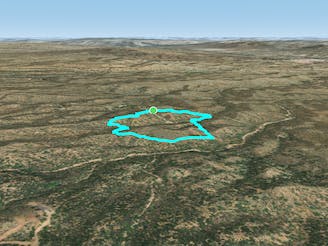 The best trail for wildlife viewing in Oracle State Park 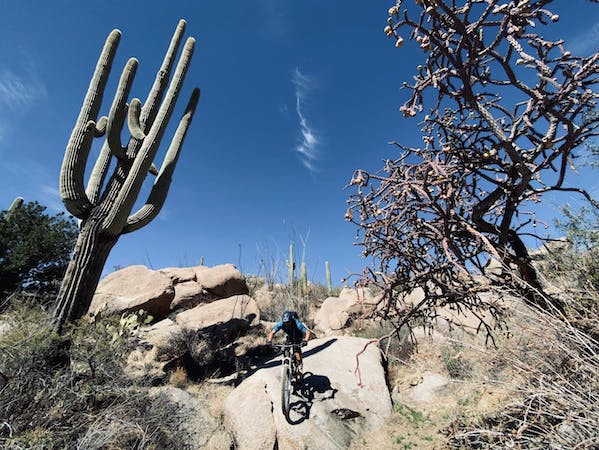