Backcountry hike along the Tuolumne River as it tumbles over many slides and waterfalls.

This trail is off the beaten path for most Yosemite visitors, but not for serious backpackers. It’s part of both the High Sierra Route and the Pacific Crest Trail, two long-distance routes that traverse the mountain range. Therefore, your company on the trail is likely to be friendly thru-hikers who are geared up for many days in the wilderness.

The hike begins in Tuolumne Meadows, on undulating terrain at the edge of the forest. In places where the trail meets the river’s edge, you’ll gaze over tranquil pools, green grass, and craggy peaks on the horizon. Where the trail departs from the river, it crosses bare rock slabs where cairns mark the way. After a few miles in and out of the forest like this, the canyon starts to close in and steepen. Where the trail crosses the river on a bridge, the water turns from calm to cascading, and the horizon falls away to the west. This is the beginning of the Grand Canyon of the Tuolumne, and the trail descends into it.

The rest of the way to Glen Aulin is on steep, rocky terrain that more or less traces the tumbling river. The water falls continuously in long slides and many small falls, with larger drops in some places. The tallest waterfalls end in pools that are nice for relaxing and dipping your feet. One particularly long and snaking series of cascades marks the final stretch to Glen Aulin, which is a very steep descent. The camp is in a flat spot along a tributary stream, where one large pool settles briefly before the river drops away once more.

Glen Aulin is one of a few serviced hiker retreats in the national park, called High Sierra Camps. Reservations for these are obtained through a yearly lottery. If you prefer to camp self-supported in the surrounding backcountry, you need only a wilderness permit from the national park.

From Glen Aulin, trails diverge to various other destinations, making many possibilities for overnight trips. The route mapped here turns around at Glen Aulin, for an out-and-back that makes a solid day hike or easy overnighter. 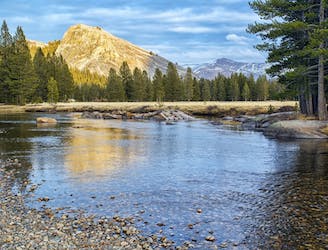 Miles 942.5-1016.9 of the northbound PCT: Continuing through the northern reaches of Yosemite National Park, among a labyrinth of granite far removed from the park’s crowded areas. 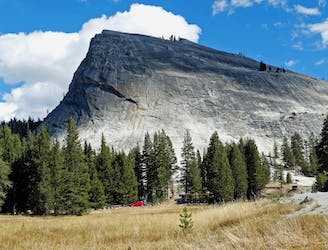 Hike and short scramble to an impressive granite perch over Tuolumne Meadows. 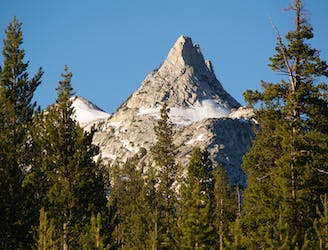 Hike and rock climb to one of the most impressive summits in Tuolumne Meadows. 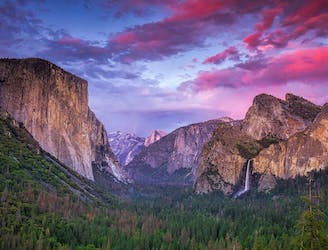 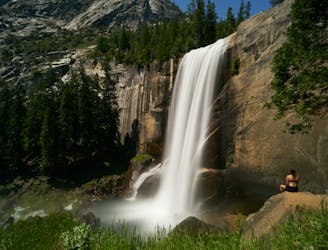 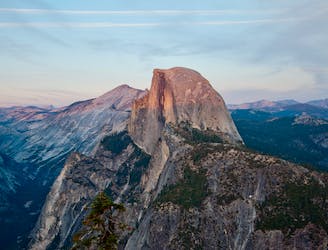