A long, mostly-gravel tour through some of the more remote corners of the Grandfather District.

As mapped, the ride begins at large city park in Collettsville. The advantage to starting here is that the parking lot is large, paved, patrolled by local police, and cell reception is usually still available depending on your carrier. A gas station is also located at the major crossroads in town if you need any food or water. If you're coming from Boone or Blowing Rock, you could begin on the Blue Ridge Parkway. Remember though, that is the high point of the route, meaning you will descend for the first half, then the second half will be all climbing.

Best ridden counter-clockwise, the route returns via Brown Mountain Beach Road, following Wilson Creek through it's namesake gorge. According to Wikipedia, "Wilson Creek itself is a water system that originates in Calloway Peak and stretches for 23 miles before dumping into John's River." It's also part of the Wild and Scenic River System and home to some of the best fishing and paddling in the region. Prior to being settled in the mid-1700's, it "was once used by the Cherokee Indians as a summer hunting grounds," the article continues.

Though extremely scenic, this portion of the ride is open to vehicles and parts of the road are too narrow for two cars to pass side by side. Though negative encounters are rare between bikes and vehicles, be mindful of construction and/or logging vehicles that utilize the road regularly.

Though most of the route sees vehicles daily, this route is listed as very remote since you will be far from help should something go wrong. Expect to be completely autonomous an don't hesitate to double up on spare tubes and other gear. Weather can also change drastically as you reach the higher elevations, so consider bringing an outer layer along no matter the time of year. In Pisgah, a 5% chance of rain means you will get rained on. 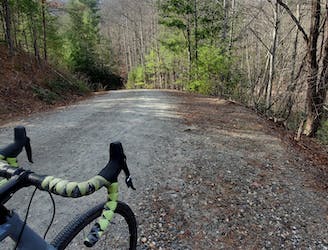