An epic tour of the Smokies reserved for the most adventurous trail runners.

The Smokies High Peaks Loop is arguably one of the most epic undertakings in Southern Appalachia. It visits Newfound Gap, Alum Cave, Mount LeConte, Charlies Bunion, and several others. It's an all-day adventure loaded with big views — perfect for experienced trail and ultra runners looking for a challenge. If hiking is more your style, it's a great 2-3 day loop with camping at Mount LeConte and Ice Spring Shelter on the AT.

There are several versions of this loop, and this one is mapped from the Kephart Prong Trailhead. The first few miles see little traffic, and it offers a closer starting point to anyone traveling from Asheville, Waynesville, Sylva, or Cherokee. You could also begin at Newfound Gap or start at the Alum Cave Trailhead. There is a short stretch of road between the bottom of Chimney Tops and Alum Cave, but it could be avoided if you have two vehicles available.

The loop is most often run clockwise but could be equally rewarding in the opposite direction. Due to snow and ice, it should generally be avoided during the winter. It does, however, offer a nice break to the summer heat. Even in September, the temperature atop LeConte could be 20-degrees cooler than the valley below.

As mapped, the first half of the route begins with a long climb from Kephart Prong to Sweat Heifer Creek Trail where it intersects the Appalachian Trail. Follow the Appalachian Trail south past Newfound Gap, then look for the junction with Road Prong Trail at a small parking area the AT passes through. The turn can be difficult to see. Road Prong is a former access road and is quite chunky at times. Near the bottom, you'll have the option to spur off to Chimney Tops for some extra views.

Part two begins with a short road walk, then a demanding climb up Alum Cave. It's also one of the top hikes in the Smokies and a popular route to Mount LeConte, so prepare to pass a few people on the lower two miles. The upper half is far less visited, and the lodge near the summit offers basic snacks and drinks between March and November. They accept credit card or cash, and cell reception is surprisingly strong because of how high the mountain stands.

Passing LeConte, the Boulevard Trail is one of the most exhilarating trails to run anywhere in the Smokies. It follows a narrow ridgeline and offers frequent views with no major climbs or descents before reaching the Appalachian Trail. Follow the AT north to Charlies Bunion before taking Dry Sluice Gap Trail to Kephart Prong.

Typical of the Smokies, dogs are not allowed on any part of this loop. There is plenty of water available along the trail as long as it's treated or filtered first. Don't pass up the opportunity to fill up at Mount LeConte. Water is unavailable on the Boulevard Trail. 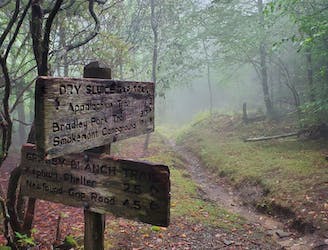 A epic trail run with spectacular views from Charlies Bunion and the iconic "Jump Off" on the AT. 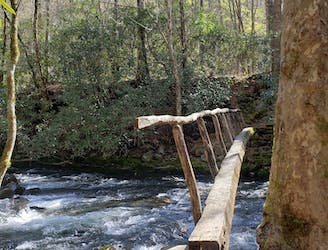 A classic loop from Smokemont Campground perfect for trail running. 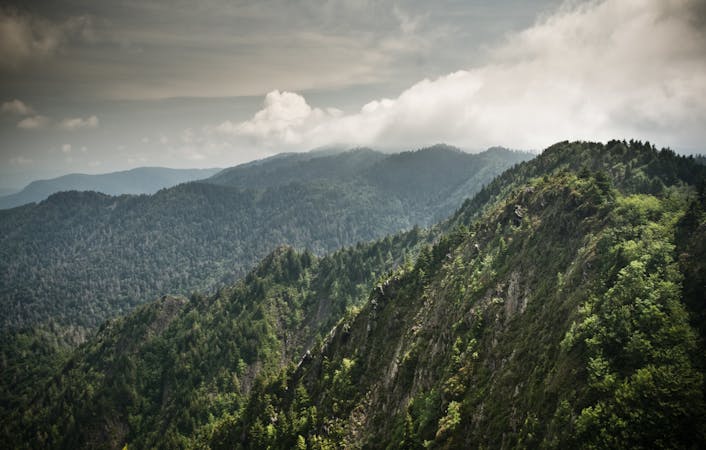