It might be slightly lesser known for its freeriding than some neighbouring resorts but Sainte-Foy-Tarentaise is an off-piste mecca! 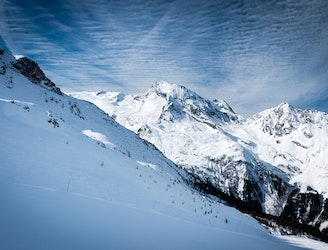 Nestled deep in the famous peaks of the Savoie at an altitude of 1550 metres, Sainte-Foy is a relatively small ski area, with just 4 lifts and plenty of traditional, old buildings making up the village centre. This makes it something of an anomaly in the Savoie - an area which is famous for its enormous, sprawling, modern ski areas - and all the better for it.

The main village is on the road which links Bourg Saint Maurice with Val d'Isére but the ski area (known as Sainte-Foy Station) is 4 kilometres off the main road and is reached from the village via a series of steep hairpins. The fact that Sainte-Foy is (by local standards) a small ski area (all things are relative - there's 1000 vertical metres between the highest and lowest points of the resort) means that it can be wonderfully quiet, both on and off the pistes.

The freeride lines described here are as varied as they are fun, and there is truly something for everyone in Sainte-Foy, from the super hardcore Foglietta West Face (which hosts a qualifying event for the Freeride World Tour) to the mellow "Le Monal via Le Clou"; an ideal introduction to serious off piste skiing.

If you've skied all the lines described in this guidebook and are keen for more, why not jump in the car and head a bit further up the valley to check out what Tignes and Val d'Isére have to offer?