Ski some mellow powder beneath the towering south face of the Matterhorn. 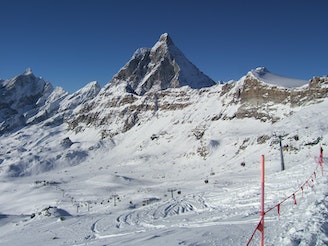 The Matterhorn/Cervino towering above the Cervinia lifts

Cervinia is something of a freeriding hidden gem for several reasons; firstly, it's only one ridge away from Zermatt - one of the most famous mountain towns on planet - which tends to attract many potential visitors to Cervinia. Secondly, Cervinia has a reputation for mellow skiing, which puts off the more hardcore freeriders out there. Finally, Cervinia is right at the end of a long valley and there are much easier ski towns to reach from major European cities.

Let's deal with those issues one at a time - Yes, Zermatt is more famous but the Matterhorn (or the Cervino as it's known in Italy) towers over Cervinia too and looks no less spectacular than it does from Switzerland! Next, the terrain at Cervinia is indeed pretty mellow on the whole, but who doesn't love blasting down big, wide bowls full of powder?!?! And as for the access issue - good things come to those who explore!

Cervinia also has the added advantages that it is a considerably cheaper destination to visit than Zermatt, and with the town being in Italy, the food is amazing to boot.

This guidebook showcases 10 of the town's best freeride lines. Once you've ticked them, nip over the ridge and give these 20 lines a go!

A nice line over the glacier

An easy wide off piste run that must be made with someone that knows this area, plenty of hidden crevasses here.

The very classic Teodulo freeride slope is one of the most known and haunted off-piste run.

A classic ride between Theodulo and Bontadini runs. Sunny and wide.

Another great classic, it's the more challenging line of Carlo off-piste route. For expert riders.

A classic line starting from Plateau Rosa and going towards the very center of the resort. For advanced and experienced skiers.

An hidden freeride gem underneath the Gran Sometta peak.

The twin line of the Pancheron 1 freeride line. Short but fun and moderately steep. Pay attention to avalanches.