The most famous expert runs at Vermont’s legendary ski resort. 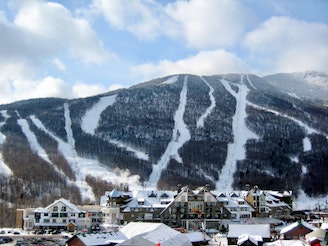 The advent of alpine skiing in Vermont took place at Stowe in the 1930s, and back then, they cut ski lines in pretty much one way–straight down the mountain. Felling each dense tree by hand was a lot of work, so the runs stayed narrow and fast. The Front Four embody this classic style, but they are especially steep.

The runs are Goat, Liftline, National, and Starr. When first cleared long ago, they were the stuff of legend. Even today, with well over 100 named runs at Stowe, their luster has never faded. They remain a rite of passage for East Coast skiing; learners aspire to conquer them someday, while locals rip them as the day’s first runs. To any skier or snowboarder at Stowe, the Front Four are must-do lines, as steep in pitch as they are steeped in history.