A right of passage for the Coastal BC ski mountaineer, the Matier Trifecta links up steep ski lines on Joffre, Matier, and Slalok Mountains! 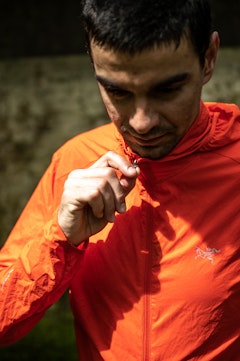 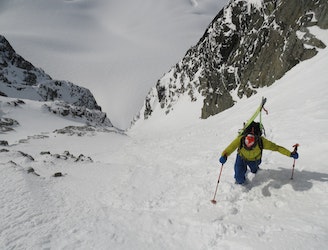 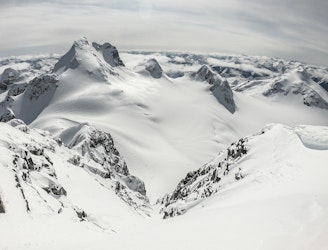 An exciting view looking directly down the Aussie Couloir with Matier in the background! 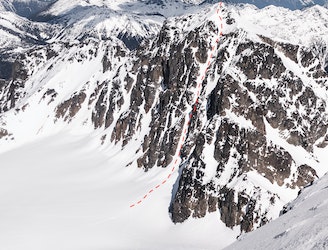 The full Australian Couloir on Mt. Joffre as seen from the summit of Matier. 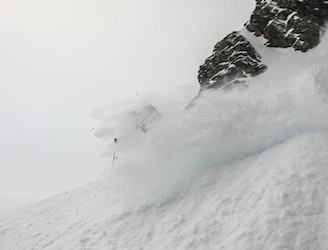 Paul G enjoying deep pow in the Aussie on a storm day! 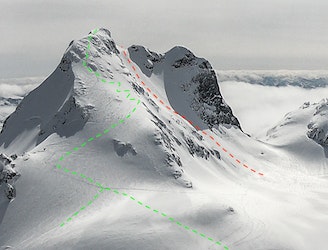 Ascent and descent line for Matier's NW Face as seen from Mt. Joffre. 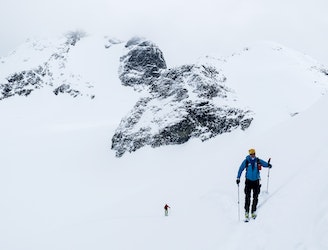 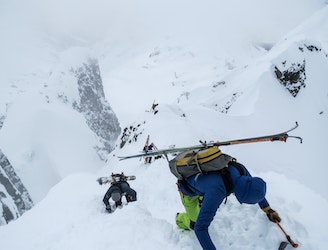 Skiers downclimbing the summit block to drop into the NW Face. 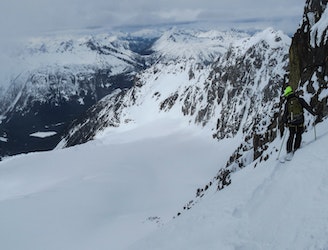 A skier about to drop into the NW Face with Joffre's Aussie Couloir in the background. 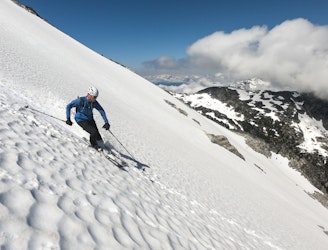 June skiing on the Stonecrop Face. 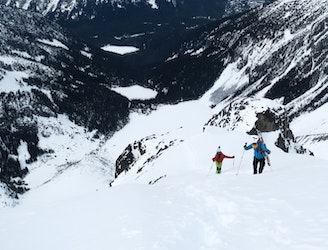 Skiers booting up the ridge towards the summit of Slalok. 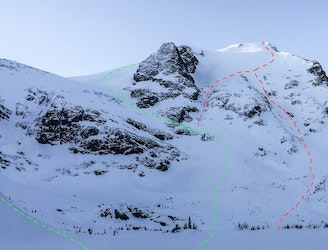 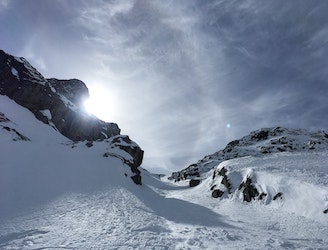 Looking up one of the descent variations on the Stonecrop Face 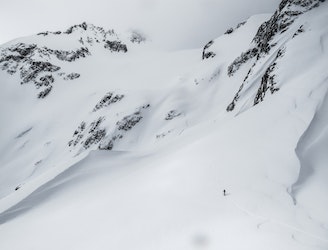 A skier visible climbing up the Anniversary Glacier just after passing Motel66. 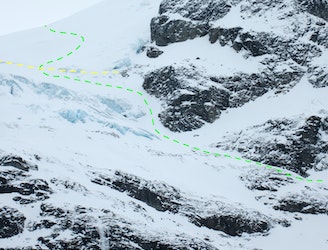 Topo showing right side of Matier Icefall with alternate ascent route in green. Yellow is major crevasse of concern.

Each of these routes is a classic on their own and all are sought after objectives, but if you've got daylight to spare, it's even better to link two or even all three!

With the recent landslide and resulting closure of the Cerise Creek area, the only legal access is via Joffre Lakes. Follow the standard tourist trail from the parking lot to the Upper Lake. Often it's well travelled and even can be tricky to skin with so many snowshoers.

Once you reach the Upper Lake however, you'll leave behind the crowds and enter the alpine. You have a choice to climb either side of the Matier Icefall, dependant on conditions.

Most parties reach the upper Matier Glacier and head directly for the Aussie Couloir on Joffre. The Aussie is south facing and will start to be sun affected early so it makes sense to get it out of the way. Be mindful of other groups as this is a popular objective and you must climb the descent route. It's worthwhile being first in line!

From Joffre, head up to the Anniversary Col to climb Matier. You'll be tired of boot packing after these two climbs but Matier is slightly more technical so it stays interesting. The summit ridge and down climb to access the NW Face are spectacular. Drop into the face but be cautious of windslab and the bergschrund at the bottom.

Now, cruise across the Matier Glacier, shooting for a low point on Slalok Shoulder where some steep skinning and more booting will take you up the ridge to the summit pyramid. Sometimes you can ski right off the summit onto the face with a fall line descent all the way to Joffre Lake and out the trail!

This linkup is a classic! Look for good stability with some fresh snow early-mid spring. If it's been warm and sunny, the Aussie may be boilerplate ice and not worth attempting but don't despair as the other two runs are north facing and may be in much better shape! Crampons and and ice axe are mandatory, as well as glacier kit and a rope just in case!