The 10 finest ski descents at perhaps the greatest off-piste ski hill in the World! 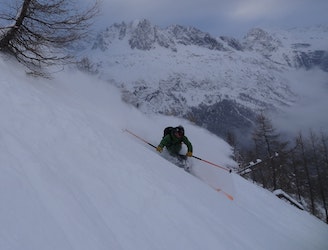 Going for it in the trees beneath the Tabé Chairlift.

Grands Montets is widely considered to be one of - if not the - best freeride ski area on the planet. There aren't many skiers out there who'd disagree that it at least deserves a spot on the podium!

The "GM" (as the Chamonix locals refer to it) has something for every freerider, but there's no question that it's best suited to advanced skiers; the terrain here is generally steep and uncompromising, which is just the way Chamoniards like it. There's every type of run available at GM, from tight trees lines through to huge, open bowls which are just begging to be skied at high speed.

We've listed 10 lines here but as you'll soon realise, these represent only a small glimpse into the possibilities at this most famous of ski areas. And that's before we even start discussing the Grands Montets cable car itself which - when it's been rebuilt after a fire destroyed it - will once again whisk skiers up to over 3200 metres, and yet another lifetime's worth of classic ski runs.