Ski Down Under : Guthega and Mount Tate Tours

A handful of atmospheric ski lines at the northern edge of Perisher Ski Area. 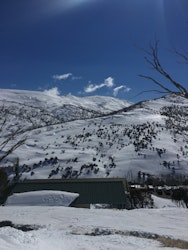 View from Guthega village towards Trig 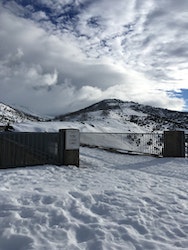 Ask people to name ski touring destinations in the southern hemisphere and you're likely to hear "New Zealand" along with "Chile and Argentina". One country which probably wouldn't get a mention is Australia - a nation known for its beaches more than its mountains. However, whilst Australia might lack huge peaks, the mountains it does have possess a unique ambience all of their own.

Some of the best of Australian ski touring can be found in the region north of Perisher Ski Area, and we've included here a few good lines to get you started, including a route to the top of Mount Tate - the local "big" peak at just over 2000 metres. All of the lines included here are close together so once you've done the trip over from the lift system it's worth spending a day ticking off a few different routes.

Once you're done with these, there's plenty more to go at just a short (by Australian standards!) distance away at the nearby Thredbo resort. In between the 2 resorts is also a small but fun ski area called Charlotte Pass, which is well worth a day of your holiday.

So whilst it might not be as well known as some other southern destinations, Australia should really be on any skier tourer's radar!

Nice scenic tour from Gugthea Dam via the Trig

A creek line run with sections of tree skiing

Open line down the ridge