Ski tour to the top of Australia from the legendary Thredbo resort! 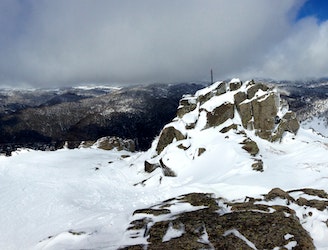 Australia might not be blessed with many huge peaks but it's one of the few countries in the World whose highest mountain can be ski toured easily in a half day hit. Mount Kosciuszko is 2228 metres but can be ascended without too much effort by starting from the lift system at Thredbo ski area; one of Australia's premier mountain destinations.

Ski touring Kosciuszko isn't just about summit bagging - the mountain is home to some really fun freeride terrain and we've covered some of the best lines through it in this guidebook. Having reached the summit, spending the rest of the exploring the various faces and bowls below it will provide an excellent day of skiing.

We've also included some superb adventures on Kosciuszko's neighbouring peaks, including Ram's Head and South Ram's Head, both of which have brilliant ski lines from their summits. For those who only want to put in minimal effort for their lines, you'll also find details of Dead Horse Gap Run - a brilliant freeride line which is accessed via the shortest of walks from the lift system.

Whether you're a peak bagger who wants to tick Australia's highest point, or simply a skier who wants some smile-inducing freeride, this guidebook has got you covered!