While photographers flock to one spot to watch grizzly bears, hikers can roam the rest of Katmai's volcanic landscape, which is forever transformed by one of the largest eruptions in recorded history. 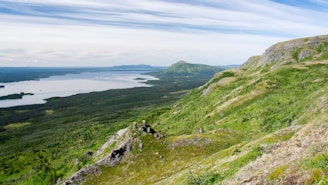 On the Dumpling Mountain Trail 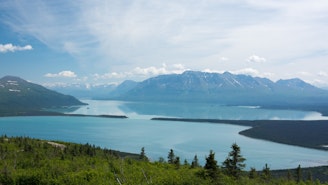 View over the lakes and mountains 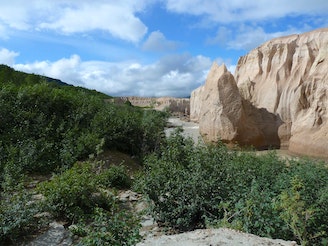 Ukak River in the Valley of Ten Thousand Smokes 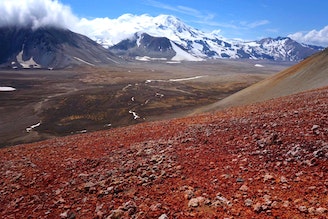 The Valley of Ten Thousand Smokes 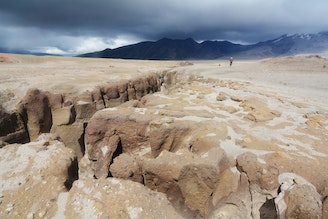 The gorge of the River Lethe 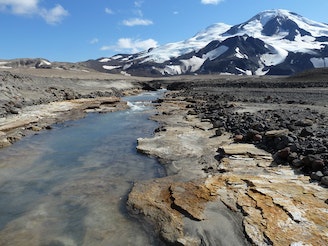 An outlet stream near the Mageik Lakes 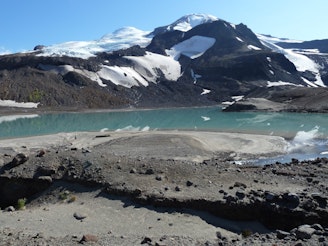 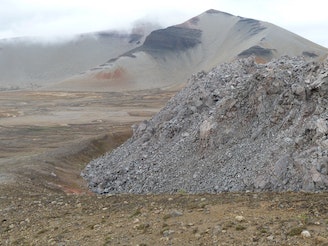 The lava dome of Novarupta, with Baked Mountain beyond

If you’ve ever seen a photo of a salmon leaping through the air, aimed straight for the open jaws of a grizzly, there’s a good chance it was taken in Katmai National Park. Most people come to this Alaskan destination to watch bears gorge themselves in the Brooks River during the salmon runs in summertime.

The original reason that Katmai was made a national park was not the bears, however. It’s actually the surrounding volcanic landscape, which experienced the largest eruption of the 20th century, and today you can still see the scars of fantastic destruction. Here on the Alaska Peninsula, most of the mountains are volcanic, and one of them erupted so violently in 1912 that it sent ash around the world and briefly affected the global climate. Despite the scale of the blast, little was known about it because the location was so remote. Not until four years later did scientists arrived, and they discovered an entire valley buried in debris, still so hot from the eruption that steam arose everywhere. They dubbed it the Valley of Ten Thousand Smokes, and in it, they found the source of the destruction––an unassuming crater near the foot of Mount Katmai, which they named Novarupta.

In the past 100 years, the Valley has mostly cooled, leaving a lunar-like landscape of blowing ash and lightweight rocks called pumice. Backpackers can cross it and camp at the foot of the mountains that surround it. The Novarupta crater still fumes, and makes one destination for hikers to find. As with many other national parks in Alaska, much of Katmai is true wilderness with no designated trails or routes, but the park has a few designated trails as well. One is near the campground, and another is in the Valley of Ten Thousand Smokes. Both of these are covered in this guidebook, as is one possible wilderness route in the Valley.

Any visit to Katmai requires some determination and creativity in planning, no matter how far you want to hike once in the park. The first challenge is simply getting there, as it's only accessible by plane or boat. Most people fly into Brooks Camp, which is the park’s main visitor area and where the only campground is located. The Brooks River is nearby, and short trails lead to the bear viewing platforms.

For those satisfied with day hiking in Katmai, Brooks Camp is the place to stay. It requires a reservation, and you’ll need to bring your own gear plus food for multiple days of camping, in wet weather, and with bear safety in mind. Backcountry hiking of course requires substantially more preparation and specific skills. No permits from the national park are needed, but you’ll need to thoroughly plan a route and be equipped for total self sufficiency, among the harsh and varied environments of the Alaska Peninsula. Let this guidebook serve as inspiration for hikes both short and long in Katmai, but expect to draw on a variety of sources in order to fully plan a trip to this remote and wild national park.

A mountain hike beginning in Brooks Camp campground, reaching views of the whole valley and the option to continue to the summit.