How to make the most of your morning with dawn patrol laps at Breckenridge. 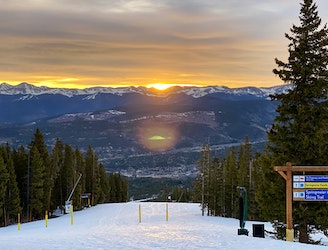 Sunrise from the up-track at Breckenridge

As one of Colorado’s major hubs for mountain sports, Breckenridge is home to a strong skimo scene. This town, which is well-known to tourists, is also populated by a community of year-round crushers, who don touring gear in the winter to go skiing uphill. If you want to be a part of it, just bring your AT setup to Breckenridge Resort at 6 in the morning, and join in the fun.

The resort provides a go-to training ground for locals, as you might expect. The resort is somewhat restrictive on access, however, allowing uphill skinning only in the morning, and only on a handful of designated runs that must also be used for the descent. But with the ski slopes extending practically into town, getting on the mountain is easy enough if you’re willing to get an early start.

On this map, you’ll see the four routes designated for uphill at Breckenridge, which are spread among the resort’s multiple base areas. Tap for more information on each, and for links to the uphill access policy. Note that all uphill users must obtain a permit in advance, which is available online. Use this guidebook to decide the uphill route that’s best for you and to learn what else you need to get on the mountain. Then you’ll be ready to go join the dawn patrol for uphill laps at Breckenridge.