How to Earn Your Turns Inbounds at Copper 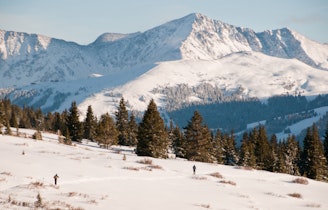 Copper Mountain is a mecca for all types of skiers and riders, known for its epic lift-served terrain, Woodward parks, and backcountry access to Janet’s Cabin. Skimo is not a genre that typically gets much attention here, but the resort recently expanded its uphill access to allow more options for those who like to earn their turns.

If this is you, it’s worth bringing your touring setup to Copper. Though access is still limited to certain times and designated runs, there’s enough to get your uphill fix and maybe score first tracks on a powder day. Copper offers a few routes for skinning outside of operating hours, and a handful of other routes for daytime use. An uphill armband is required, which is separate from a lift pass. If you are staunch on earning your turns and not riding lifts, you can get a selection of frontside pistes and trees in between. It's also possible to reach the stellar sidecountry of Union Meadows on an uphill route. Because there is still a lot more to this mountain, however, the ideal scenario would be spending a few days at Copper, riding lifts and skiing throughout the resort, but earning your turns one morning or burning out with uphill laps in the afternoon.

In this guidebook, you’ll find all of Copper’s designated uphill routes, which you can tap for more information on each. Remember to review Copper’s uphill policy and get the access armband before you go. For even more ideas on skiing and riding here, check out FATMAP’s other guidebooks, Epic Freeride Lines and Backcountry Touring at Copper Mountain.

Morning and evening uphill access, from East Village to the top of Super Bee.

Morning and evening uphill access, from Center Village to the top of Super Bee.

A mid-mountain blue run for daytime uphill laps at Copper.

A mid-mountain green run for daytime uphill laps at Copper.

An easy daytime uphill route, and the start of the approach to Janet’s Cabin in the backcountry.

A woodsy uphill route near the outskirts of Copper Mountain Resort.

A way to reach the Union Meadows sidecountry without relying on a lift.

A somewhat obscure up-track through the woods, from West Village to Timberline Express.