The Rut: One of North America’s Toughest Trail Races 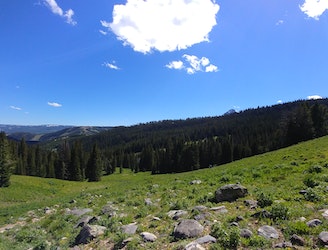 The Rut is one of the most coveted trail running events in the North America. In fact, the 2020 race sold out in a mere four hours, with 3,060 participants spread across four distances and multiple events. According to the race promoter, Runners World “named the Rut 50k the best destination ultra of 2020,” and as one of the “10 Jaw-Dropping, I’m-Never-Going-Back-to-Work Running Trips to Take This Year” in their 2020 Travel Awards! Whether you’re already signed up or want to try your luck at getting in next year, here’s what you need to know about one of the most spectacular, exhilarating, and breathtaking trail running celebrations in the west.

Held each September around Labor Day, The Rut is comprised of three main distances – 50k, 28k, 11k, plus a 5k hill climb and 1k Rut Runts Run for children. As with any world-class trail race, stocked aid stations, craft beer, finishers medals, and shirts are included with registration. The Rut Mountain Runs also partners with Big Sky Resort to offer exclusive lodging near the finish line. You can book accommodations online here or contact them directly at 800-548-4486.

Packet pickup begins on Friday morning and is followed by the first event of the weekend, the Vertical Kilometer (VK) in the afternoon – described as the “hardest 3-mile 'run' you will ever complete.” The 28k begins Saturday morning, departing in a few separate waves. Throughout the day, the Big Sky Resort at Lone Peak Pavilion is open for guests to pick up Rut merchandise, and a physical therapy sponsor is on-site to provide post-race massages to runners. 50k racers will be relaxing for the afternoon, fueling up on carbs, and heading to bed early given the 6am start on Sunday morning. Lights are required for the first leg of the race, though you can leave it at the first aid station if you have your name and bib number attached. Just after sunrise, the 11k race departs.

If you’re a true masochist looking for a challenge, then the Rut Trifecta may be for you. If you’re wondering – yes, it’s exactly what you think. Run the Vertical Kilometer, 28k, and 50k races for a total of 84k (52.5 Miles) with a grueling 21,700’ of climbing! While runners are still ranked for each individual distance, those attempting the challenge will be awarded their own special finisher award and ranked among the other elites who have completed all three races.

Whether you’re new to trail running or looking for a new PR, training plans are available through The Mountain Project Gym to help you prepare. These 12-week programs have even been developed by the co-founder of The Rut, Mike Wolfe.

When it comes to travel and accommodations, dozens of flights arrive in Bozeman daily, including Delta, United, Frontier, and Allegiant, among others. Yellowstone National Park is just a couple of hours south and is undoubtedly worth setting aside a few days after the race.