The tougher and wilder way of completing this epic Dolomitic adventure! 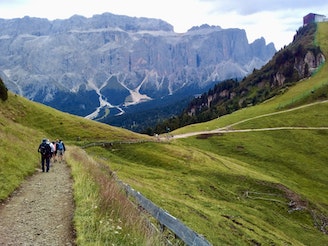 Take it nice and slow - the trail is busy 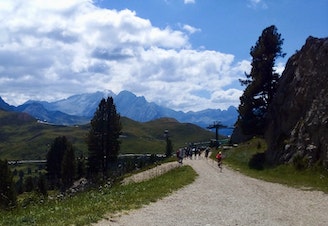 On the traverse across towards the chairlift 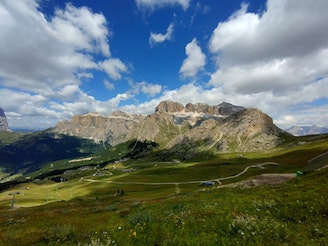 Welcome to the Dolomites! 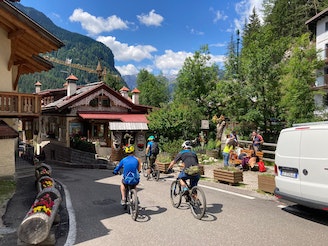 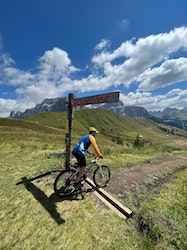 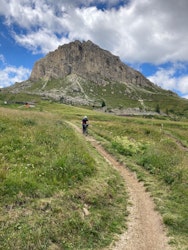 On the first section of the descent, with a lot more to come! 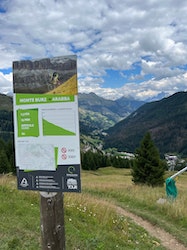 The Burz trail with Arabba below 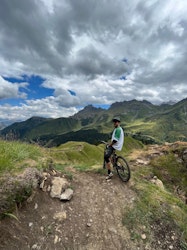 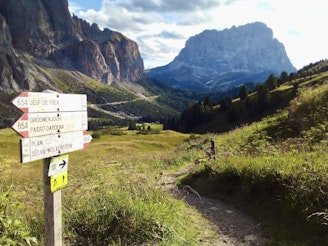 Does life get any better than this?! 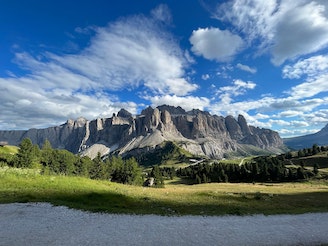 The view from the top of the Frara gondola.

Riding in the Dolomites is always wonderful - doing so by using a combination of human power and lifts to circumnavigate a legendary mountain range is truly epic! The Sella Ronda has long been a popular ski route, and enables you to explore the humungous Dolomiti-SuperSki area and travel right around the Sella towers without ever going off-piste or uphill!

The MTB version of the Sella Ronda has been developed in recent years to give a summer equivalent of the ski route, and - if anything - it's an even better adventure than the winter version. This way of doing it (the anti-clockwise route) is far harder than the clockwise circuit, and involves over 1000 vertical metres of climbing, half a dozen lifts and 60kms of riding. Without the lifts it would be an impossibly big day, but even with them it's still pretty sizeable!

You can begin the Sella Ronda at any of the access points, so depending on where you're coming from Wolkenstein, Canazei, Arabba or Corvara are all logical options - just make sure you check when the last lift you need closes so as not to get stuck in the wrong valley come the end of the day! The valleys are actually linked by roads so you could actually ride/hitch-hike back to where you need to go, but catching the lifts is certainly easier and preferable. Sella Ronda lift tickets can be bought in any of the villages en route, and cost €51 at the time of writing (summer 2022).

The riding on the trail is as varied as it is scenic, so expect everything from flowy singletrack to tough uphill grinds and you won't be far off. The route is also lined with wonderful mountain rifugios, so calorie replenishment is rarely an issue!

Most people find completing this route in a day challenge enough, but if you're really moving well and want to add some additional riding, detouring onto some of the other trails in the area is an option, and "Porta Vescovo" (above Arabba) and "Double U" (above Canazei) are both excellent and logical choices.

Regardless of whether you detour or not, simply completing this route in a single day is one of the best mountain bike adventures in Europe - savour it and enjoy the ride!

Ciampinoi to the Gran Paradiso Chairlift

A scenic and easy roll down a shared use trail

A long and beautiful journey down to a charming village