Day 1 of the Western Oberland Traverse, running from Diablerets to the Gelten Hut via the Arpelistock.

A lift-assisted day with one long climb to a summit and a long, north-facing descent.

Begin by getting the two-stage cable car from the Col du Pillon to Glacier 3000. There is a choice from the summit of the two cable cars. If you are feeling fit and fancy on taking in an extra summit, then the obvious choice is the Les Diablerets summit at 3209m. This involves a short ski down to the Col de Tsanfleuron, then a gentle skin up for about an hour to an hour and a half to the fine summit with outstanding views of the Western Alps in all directions. With or without the summit included you will be skiing gently down the glacier to the east and then northeast, using some of the pistes initially, to the Col du Sanetsch at 2252m.

From here, you are following the obvious feature of the Arete de l'Arpille which leads you eventually to the summit of the Arpelistock at 3035m. Depending on conditions this can be reasonably steady skinning most of the way, but it's more than 30 degrees at the top.

Alternatively, if it has been warm and not snowed for a while, it can be icy in the morning, needing either ski or boot crampons, or may even have significant snow-free sections. In any case, just below the summit it is steeper and you can either take the ridge direct or just to the east of the ridge (to its right).

It is all downhill to the Gelten Hut here. There is a choice of two descents to the north and northeast which go either side of an obvious, visible peak called the Huenerhornli, which lies to the north of the Arpelistock. Both usually have lovely snow. 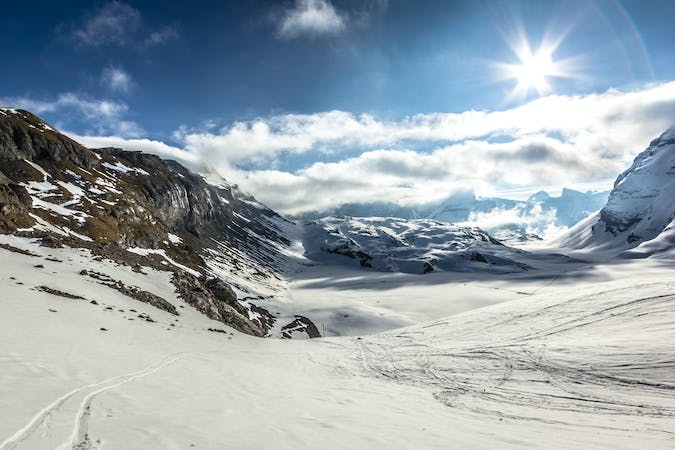