Some of the steeper terrain around Big White, easily accessed from the Gem Lake chairlift.

This tour takes you outside the boundaries of Big White ski area. If you're going to use the Big White lift system to access out of bounds terrain then, at the very least, make sure you're suitably equipped and experienced for the tour you're doing. It's officially not permitted to use the lifts to access the backcountry but it seems to be tolerated if skiers are sensible and respectful of the terrain they're entering. Don't be the reason that Big White ski patrol get stricter!

Gem Lake chairlift is the part of Big White which is closest to Kelowna, and it's only about a 45 minute drive from downtown. There's plenty of parking and a little warming hut at the bottom so it's an excellent little base from which to do a ski tour.

The terrain off the back of chairlift is some of Big White's steepest, and there is the potential for avalanches here, so pick your day carefully when exploring this zone. The line we've drawn here is really just a way to get you onto the terrain rather than a specific route recommendation - the potential for finding your own lines is huge, so just make your way onto the small peak behind the top of the chairlift (it's just about worth putting skins on for the ascent rather than bootpacking) and pick your line!

There are some cliffs to skier's left, but other than that the terrain is quite uniform, and has nicely spaced trees, gullies and little rolls to play with. One lap is unlikely to be enough so once you're done, skin back up to the peak and pick another line! The skin up requires good micro route finding skills if you're going to do it efficiently, but however you ascend you'll likely be doing some steep skinning and tricky kickturns. This isn't the place to be learning how to ski tour!

Once you're done with this zone, either sample some of fun lift accessed terrain from Gem Lake chairlift, or explore another part of the Big White backcountry! 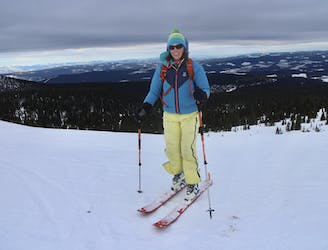 Some of the steepest terrain around is remarkably easy to access! 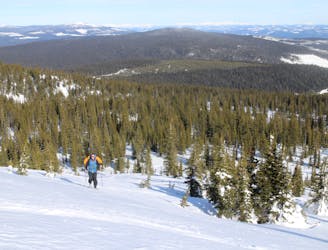 A scenic journey through some fabulous ski terrain 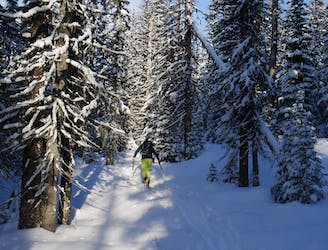 A long skin in is rewarded with some huge scenery and epic tree skiing. 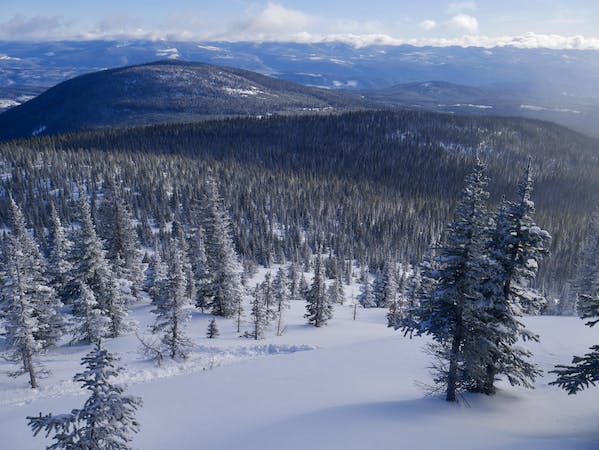