A classic piste tour which provides access to the Kandahar - one of the most famous pistes in the World.

With a pleasant (albeit steep) ascent and then a legendary piste to descend, this is an understandably popular tour. The ascent route has been designated as an official ski touring route and is open to tourers between the closing of the lifts and 9pm every evening. If you do this tour in the evening, ski down the pistes closest to the ascent route and avoid going down the Kandahar piste unless you want to have a surprise rendez-vous with a piste basher preparing the resort for the following day!

Start the ascent at the foot of the Prarion cable car and follow the Les Aillouds blue piste up to the foot of the Maison Neuve chairlift. From here it's possible to keep following Les Aillouds but a nicer option is to nip into the woods on a good track (just follow our line to locate it) that winds up to the Vieilles Luges restaurant and then (after a short, steep section) back onto the piste.

Ascend the piste for 5 minutes and then once again nip into the woods and follow another nice (but much smaller) path that zig zags up to the Table d'Orientation red piste. Follow this to the top of the Prarion cable car.

If the resort is not yet open for the season or you're doing this tour in the middle of the day, then the best descent is to follow the Aillouds piste as it winds over to join the legendary Kandahar run, and then ski this back down to the valley floor.

The Kandahar has hosted an Alpine Ski World Cup for years and all the great names of the sport have written their name on its slopes. Savour the history and try to imagine how terrifying it must be to ski down at over 100kph! 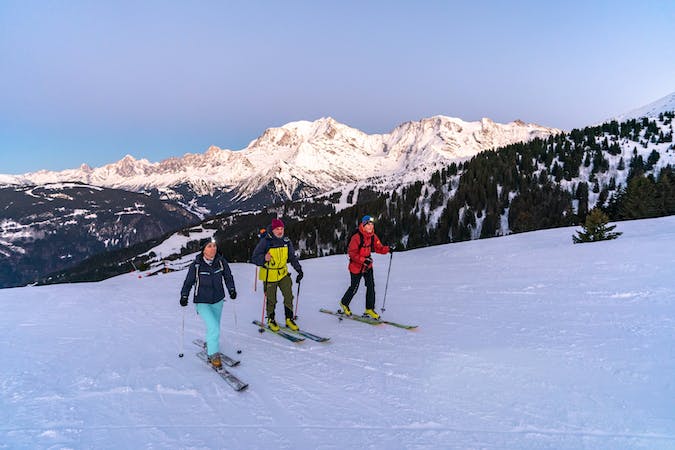