Technical snowshoeing route that offers a panoramic view of Chamonix.

The climb to Aiguillette des Houches is for the experienced snowshoer, considering the steepness of the last part of the climb, but it's also possible to stop at Chalets de Chailloux, just above the tree line, where the view of the Mont Blanc range is already worth the climb and presents a much easier challenge. As the area can be exposed to avalanches, especially during and after snowfalls, be sure to check the avalanche report before going.

The hike starts in La Flatière where you'll be following an easy trail in the forest until you reach Chalets de Chailloux. From the Chalets, you'll roughly keep following the summer trail that gradually climbs along and below the Pointe de Lapaz (again, get up to date information on snow conditions) before arriving below the col, about 150m under it.

This part can be particularly difficult considering the steepness of the slope and can test your skills on snowshoes, especially in icy conditions. Consider turning back if you're not feeling confident about the climb, keeping in mind that you're also going to have to come down this way.

At the col, Aiguillette des Houches will be 10m to your left (be mindful of cornices) and Pointe de Lapaz can be reached by following the ridgeline for about 200m to the right. You won't miss anything by not going, though, as the view is about the same from the col, so the appeal is mostly for peak bagging purposes.

To get back to the start, simply retrace your steps all the way back. 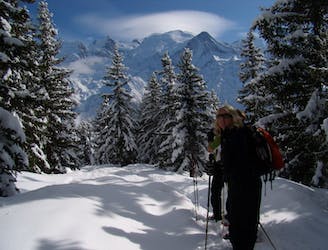