If you only have time for one hike in the Dolomites, make it this one. You'll start and finish at a gorgeous mountain refuge, visit another one, and see the most famous mountains in the whole of the Dolomites.

Start by driving to the Rifugio Auronzo and parking up. Hike north-west along an undulating rocky path and then swing around to the north and cross a scree slope which accesses the huge bowl beneath the north faces of the Tre Cime peaks. As soon as you enter the bowl you are teased with the first views of the legendary faces and as you cross the bowl (heading north-east) the panorama only improves. The Tre Cime peaks are home to some of the famous rock climbs in Europe and Cima Grande's north face is one of the so-called "Classic 6" north faces of the Alps, and the only one in Italy. Even today, with modern gear and accurate weather forecasts, climbing it remains a highly coveted prize for serious mountaineers.

The journey across the bowl takes you gradually down to a grassy area due north of the Cima Piccola. From here, climb up to the Rifugio Locateli, grab a drink and settle in to admire the extraordinary view. As with many towns, mountains and huts in the Dolomites, the Locateli has 2 names - one Italian and one German - so you may see it referred to as the Dreizinnenhütte.

It's a big statement but the Locateli might just be the best situated hut in the Dolomites. The view it enjoys across the Tre Cime is unrivalled and as the sun swings across the sky throughout the day, the light on the famous peaks is ever changing. As such, don't rush off from the hut but instead spend as long as you can admiring the vista.

When you finally get moving again, climb southwards to a col north-east of Cima Piccola and then continue south to the Lavaredo hut. Grab a final few calories to power you back to the car and then follow the track which leads easily to the Rifugio Auronzo. The south faces of the Tre Cime are not quite as spectacular as the north faces, but this final section of the hike still features some fantastic views so you will be entertained all the way back to car. 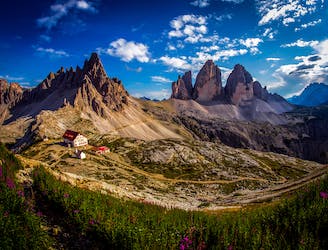 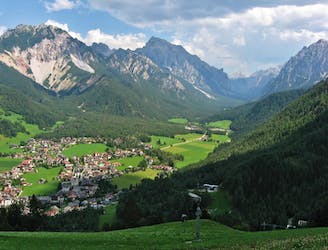