If you are lucky you will see nobody on your ski tour today. Much over 1000m of skinning and you often get away from the crowds. There aren’t any crowds in the Mercantour heading to unguarded bivouac huts anyway, so I think you will be in luck. Your destination is in an idyllic location, set on a sunny shelf, next to a couple of large snow-covered lakes, an ideal place to watch the sunset, as you can see from the pictures. The only caveat might be that this is not a well-insulated hut and seemed quite draughty. Despite the wood burning stove we did not manage to get the temperature into double figures- ah well!

There are two ways to do this route. If you end up with accommodation down the valley in Bagni di Vanidio you can skin up the long valley past the Migliorero Hut, but if staying in San Bernolfo, it is a shorter journey with a single climb, as marked here.

Leave early as the steeper part of the climb at about 2300m gets early sun, facing E, then faces S over the high col at the top of the climb. Head up the main valley on the snow-covered track, to the SW. Angle to the NW at about 2230m, avoiding the steepest ground. You pass a large snowy lake at about 2510m, then beneath the cliffs of the Cima de Corborant, heading steeply up to the Pas de Corborant at 2934m. The descent the far side should be on good snow as it is N facing, also it is enclosed by the surrounding ridges. Angle to the NW then W more steeply between 2700m and 2600m, before it eases off down towards lakes near the hut, in a prominent position the far side of both lakes in a prominent position. 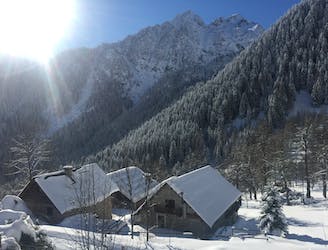 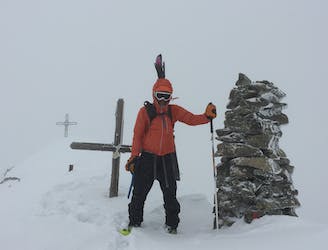 A fine mountaineering 3000m summit and another col