A technical rocky test piece that ends in Finale Ligure.

Monte Caprazoppa rises sharply above the town of Finale Ligure, forming an imposing ridge that divides Finale Ligure from nearby Pietra Ligure. While you might have a hard time imagining it when looking up at the steep mountainside, the entire ridge is covered in a dense network of singletrack trails that's perfect for mountain biking!

The route mapped here is just one loop through this trail system. It utilizes the ever-popular Bondi Trail to access the final descent down the named Caprazoppa Trail. Bondi swoops and flows along at a mellow grade, with mostly-smooth red clay singletrack occasionally punctuated by steep drops and rock gardens.

But once you turn onto Caprazoppa, gone are the smooth dirt corners, and in their place, you'll simply find rock. Rocks upon rocks upon rocks! Indeed, while there are a few short strips of dirt, the entire descent down Caprazoppa feels like a never-ending rock garden that merely changes character as it descends.

Up top, the rock garden feels like a staircase intermingled with a cobblestone street. In the mid-section, a massive waterfall-esque feature requires absolute precision to master. And down low, the rocks transition to high-speed chunk and are a bit more dispersed, with one final committing rock roll down a small cliff.

Suffice it to say, Caprazoppa is no joke. And yet… there are only about three major crux features on the trail, and all of the most challenging features can be walked. In between the crux features, you'll pummel and bash through boulders and rocks and gnar, but nothing is too huge or death-defying.

But to nail all three of the crux moves and string all of the tricky corners together? That's no small feat! If you're looking for a quick loop from town that will allow you to hone your technical skills, Caprazoppa is it. 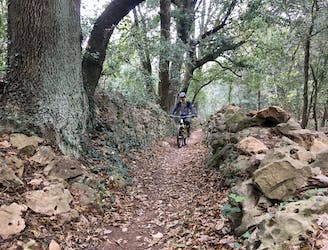 An iconic loop through the Monte Caprazoppa trail system. 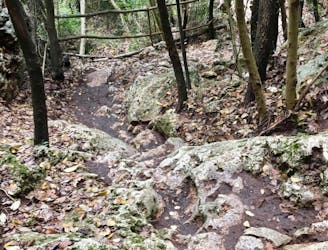 A quick lap on a challenging EWS stage. 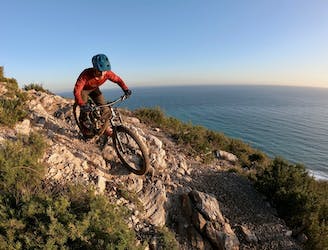 A loop that finishes on two of Finale Ligure's most beautiful trails. 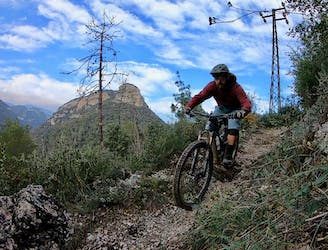