The high and wild Bucegi Plateau, perched above the towns of Busteni and Sinaia is always a barren and spectacular place, but never more so than in winter. As such this relatively "straightforward" tour feels like a big adventure despite the ease of access.

Start by riding the wonderfully old fashioned cable car from Busteni to the Buecgi Plateau. Skin/slide eastwards and then ascent south-east to the CoStila tower at 2498 metres. There are a series of buildings at the tower so on a windy day you can generally find somewhere to shelter as you grab a drink or a bite to eat. The views from the tower are amazing and it serves as a great place from where to get your bearings and figure out how all the surrounding valleys link together. You'll also have a good view of the entrance to the Cerbului Valley from here.

From the tower ski west, skirt underneath the cliffs north of Colii Obersiei and then swing around to the entrance to the Cerbului Valley. Drop in eastwards down a steep-feeling entrance gully. It's not actually especially steep but after being on such mellow terrain until this point, and with some big scenery all around you, it feels like a bit of a jolt to suddenly to be doing some "real" skiing.

Follow the bottom of the valley, passing beneath some spectacular cliffs, as it gradually narrows and then opens up again as it reaches the tree line. The skiing in the valley itself is fun and mellow, but the surrounding cliffs make it feel adventurous and exciting.

Once in the trees there are several ways back to Busteni village. If there is a decent amount of snow you can cut due south at a cleaning and ski back to the outskirts of the village. Most of the time it is easier to follow the line shown here and ski south-east out of the valley and join a road to the north of Busteni, which you can then follow back to civilisation. 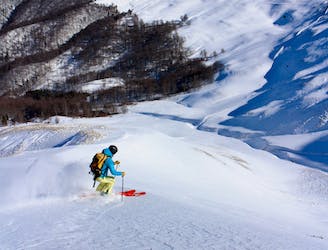 A varied and quiet tour in the Azuga backcountry.