High and hard, with sharp rocks and mountain ridges on Wales's biggest hill.

The Snowdon descent that nobody rides, the Rhyd Ddu is the hardest and most dangerous way down the mountain. It's massively technical and very exposed in places. You need to be very technically able on mountain terrain, both on and off the bike, to attempt it and significant chunks of the descent are unrideable. Based on all that, it does without saying that you don't want to be tackling the route in bad weather. That said, if you've ticked everything else on Snowdon, it's a proper adventure. If you're heading for the Rhyd Ddu, you'll presumably have ridden Snowdon before and know the way up. (If you haven't, go and ride the Ranger track first, then come back.) So, once you've finished at the summit, follow the track over the summit past the cafe and down a track that's as steep and rocky as you'd expect, heading for the narrow ridge straight ahead. Now, if you think you can ride along a thin rocky scramble with a sheer drop on one side, you can't. Get off, grab your bike with one hand, the rocks with the other and scramble! Keep right where the track forks at the end of the ridge and, if you've a head for heights, you'll be able to ride the fantastic airy traverse that follows. Survive that and you're past the big drops, but into the technical riding. It's steep and loose with rocks, drops and switchbacks. The rocks get bigger and bigger until you reach a properly tricky section. Ride it and you can definitely give yourself a pat on the back. After this the trail eases as it drops to Rhyd Ddu village and the pub. Back on the bikes, the route joins the A4085 until, just after the youth hostel, it turns right up the Snowdon Ranger track. Climb up through the zig-zags and then, as the trail flattens, turn left up a final steep grassy slope that carries you over into Telegraph Valley for a final, flat out run to Llanberis.

Route info – a trip up Snowdon, down the Rhyd Ddu and back over to Llanberis is around 24 kilometres, with 1,300 metres of climbing.

On a serious note, while Snowdon is fantastic fun to ride, there are a couple of things to note: Every man and his dog tends to head up Snowdon when the weather's good, which means a lot of walkers to dodge. And when the weather's bad, you might find yourself looking at snow, sub-zero temperatures and high winds. Pick your day carefully. In addition, there's a voluntary restriction on riding Snowdon between 10 a.m. And 5 p.m. From 1 May to 30 September. Please respect this, if only because it get so busy with walkers that it won't be much fun for you or them if you ride during these peak hours. Outside the restricted times is fine, meaning really early or late starts if you want to ride in summer, or any time you want during the rest of the year. 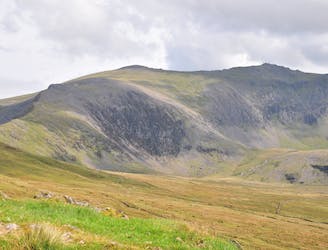 All of Snowdonia's biggest ticks, shoehorned into one awesome ride: the highest point, the biggest natural descent, the greatest vertical drop … sound good? Of course it does. 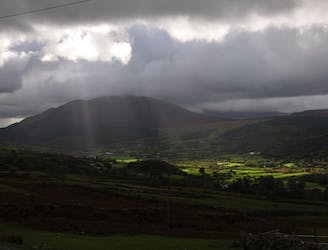 If you only do one ride on Snowdon, this is it: a huge climb, a proper summit tick and one of the best singletrack descents in the UK.