Seen from across Loch Maree Slioch is one of the great spectacles of the Northwest Highlands, a lone sandstone molar set in a jawbone of gneiss.

Fissured crags ring three sides of the monolith, rising to a striking sawn-off summit plateau; only the southeast flank offers a hands-free line of weakness. With a long approach through pretty woods, and arguably some of the best summit views in Scotland at the end of it, this route is a real gem.

Take the footpath out of the car park and turn left, following it along a fence line through sheep pastures. Heading roughly northwest away from the village, the path, boggy in places, soon joins the pretty wooded bank of the Kinlochewe River. About 1km further on the trail parts company with the river, continuing through woods below the steep southwest flank of Beinn a’ Mhuinidh (impressive waterfall up high). Meet and briefly follow the shoreline of Loch Maree to reach the mouth of Gleann Bianasdail.

Cross a footbridge over the Abhainn an Fhasaigh, then immediately go right where the path splits. The trail, soggy in spots, climbs into the glen and soon divides again. One branch of this path carries on up the floor of the glen, while the other heads for Slioch; the point at which they split may not seem hugely clear on the ground, so keep left to follow the obvious burn uphill. A steep ascent up this heavily trodden path leads up to the saddle between the little knoll of Meall Each and the rocky peak of Sgurr Dubh. The path now curves left into the boggy trough of Coire na Sleaghaich, a more impressive place than it looks from a distance.

The main route continues up the corrie for some way before zigzagging onto the southeast shoulder of Slioch, but to get a head start on the high level fun it is worth instead bearing left on a less-clear path that climbs steeply to the obvious saddle between Sgurr Dubh and the main mountain. Turn right over an unnamed top with a fantastic outlook over Loch Maree to reach the east end of a broad col, notable for its unusual twin lochans.

Re-join the standard walker’s path here for the steep, stony climb up the southeast shoulder of Slioch – it’s quite eroded in places. Pass over a minor top on Slioch’s summit plateau - unusually extensive for a mountain of the western seaboard - then bear right for an easy climb onto the southern summit. There’s a trig point and wind break here, however the nearby north summit is marginally higher. This latter stands at the airy apex of the mountain’s craggy northern and western faces, giving a sense of huge space and elevation. Its precipitous stand-alone nature makes Slioch a tremendous viewpoint, with the island-studded expanse of Loch Maree stretching away to the sea and a distant hint of the Western Isles, and the toothy Torridon skyline arrayed across the southern horizon. To the north is the wild heart of Fisherfield, and An Teallach.

To complete a horseshoe of Coire na Sleaghaich follow the plateau edge east towards the conical summit of Sgurr an Tuill Bhain. A rocky ridge soon takes shape, narrowing briefly to give some interest before a final short climb onto Sgurr an Tuill Bhain. This has an uninterrupted view east over an obscure hinterland of lochans and bogs to the massive grassy peaks of the Fannaichs.

From the summit cairn head roughly southeast down the ridge bounding the mountain’s steep eastern corrie. As the angle begins to ease bear right, taking the line of least resistance down rough pathless ground into the boggy floor of Core na Sleaghaich. Regain the approach path here for the long return to Kinlochewe. 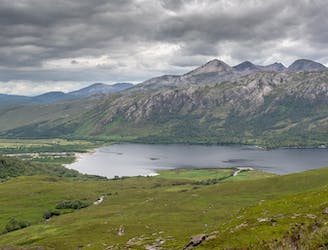 Rising from the forested shores of Loch Maree, arguably Scotland's best loch, this interesting and accessible Corbett offers stunning views of the nearby Torridon and Fisherfield hills. 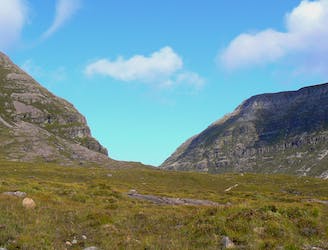 Torridon is the archetypal west coast range, and if you like your scenery on an epic scale it's unequalled. 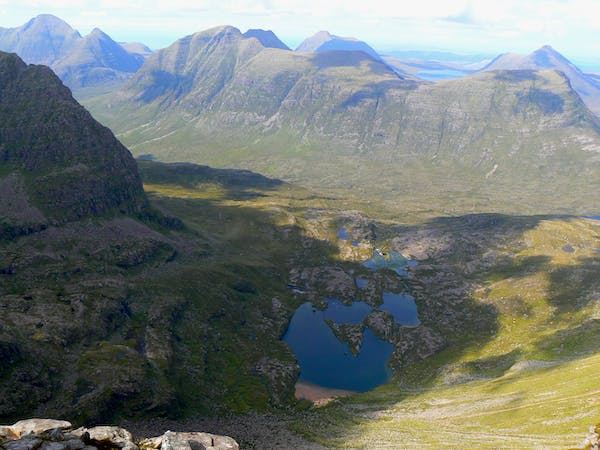