Take the guided mountain bike descent with the Cairngorm Mountain guides for 500m of vertical descent, combined with fantastic views of the Spey Valley.

The mountain bike trails on Cairngorm Mountain are accessible for all, whether you’re just starting out, or if you’re a seasoned pro. The route follows many of the marked ski pistes from the winter season, and takes in fantastic views of Loch Morlich and the Cairngorm National Park.

To access the trails you’ll need to ride up in the funicular railway. At present, you need to be accompanied by a guide, who’ll be able to point out many landmarks around the mountain, and who will be on hand to offer helpful tips about riding the trails. Riding up on the funicular, you’ll pass some of the steeper slopes on the mountain, and gain over 500 vertical metres. The train only takes around 10 minutes to whisk you up to the Ptarmigan station, where the trail begins.

Exiting the top station, you head around to the West, and begin to drop in to Coire Cas, a large natural bowl in the mountain, surrounded by “the Headwall”. This top section has a couple of steeper slopes and some loose rock, to keep you on your toes. As it flattens out, you’ll be able to ease off on the brakes, and start to take in some of the fantastic panoramic views.

As you descend further, you’ll ride directly under the Coire Cas ski tow, and out of the shelter of the bowl. Here the track is wide enough for two or three bikers to ride alongside each other, but be sure to keep an eye out for walkers who may be using the mountain.

The trail zig-zags across the mountain, before opening out and passing underneath the funicular railway. Here you can pause for a quick break and a drink, and you’ll get to see up-close how the carriages climb the mountain.

After passing under the funicular, you’ll reach another steep section, which will be a great test of your skills. However, it soon levels out, and you can ride down the last several hundred metres which run alongside the funicular track and wind their way back to the base station. 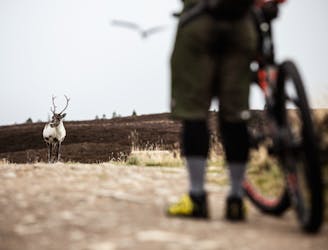 Climb one of Scotland's famous corbetts and rip a technical singletrack back down to town. 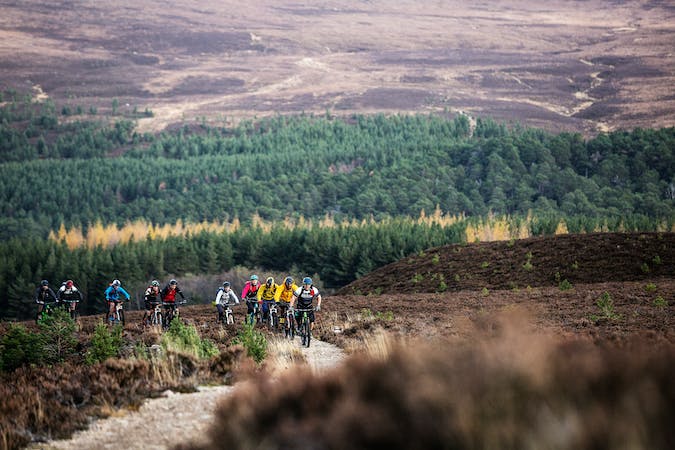