Braeriach via Allt Buidheannach aka 'The Escalator'

A truly memorable bike/ski adventure in the Cairngorms

Any trip that combines bikes and skis is always going to be an epic adventure!

This fantastic bike/ski tour is most often done towards the end of the season when the main faces are bare and you're sniffing out the last remnants of spring corn snow.

Allt Buidheannach or 'The Escalator' as it's known by backcountry skiers, offers the most direct route to the summit of Braeriach (1296m) - the UK's third highest mountain. It holds snow late in the season and is basically a ribbon of snow that leads up to the plateau from Glen Einich.

Park your car at the end of Upper Tullochgrue Road and load up your bike with all your touring kit. We found the best way to carry our gear was to attach our skis to our bike frames (protecting the frame from edges with old inner tubes and duct tape) with boots clipped into bindings. It feels less cumbersome than carrying skis attached to packs on your back as it makes it easier to pedal - especially if its windy! NB It's a good idea to bring some dry bags, spare socks and a lock for this trip.

Follow the land rover track in the direction of Loch Einich. After around 1km, the path splits. We took the 'high road' for the ascent (which involved a few steep climbs) and stayed on the low road on the return journey but either route is absolutely fine.

You will need to cross the river twice - firstly via a bridge and later by foot - hence the reminder to bring some spare socks!

The Escalator is located about half a km before you reach Loch Einich on the left as you head up the glen. Lock up your bikes, stick your trainers and wet socks in a dry bag and transition to ski mode!

If you're heading out in typical spring conditions, the snow in The Escalator may be a touch hard first thing so it's a good idea to have ski crampons just in case.

Skin up to the plateau following the most obvious line then ENE towards the summit. It's worth bearing in mind that navigation can be difficult on the plateau so be sure you have the necessary skills/experience and equipment for such a remote objective.

On a good day the views from the summit of Braeriach are truly spectacular. It's a true Cairngorm National Park panorama including Ben Macdui, Cairn Toul and Cairngorm itself.

From here you can make laps of Braeriach's three northern coires that often hold snow well into early summer or simply retrace your steps back down 'The Escalator'.

If you get your timing right you'll get excellent surfy corn snow for the descent back to the bikes. We ripped The Escalator from top to bottom in total solitude as an eagle soared overhead!

Once you're safely back down, it's time to get back on the bikes for the speedy return journey back down the Glen. Before you know it you'll be back at the car with a massive grin on your face and ready for a well-earned coffee and a scone! 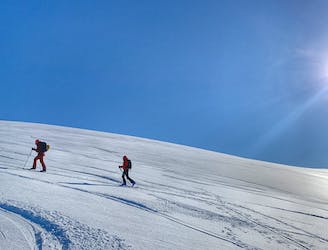 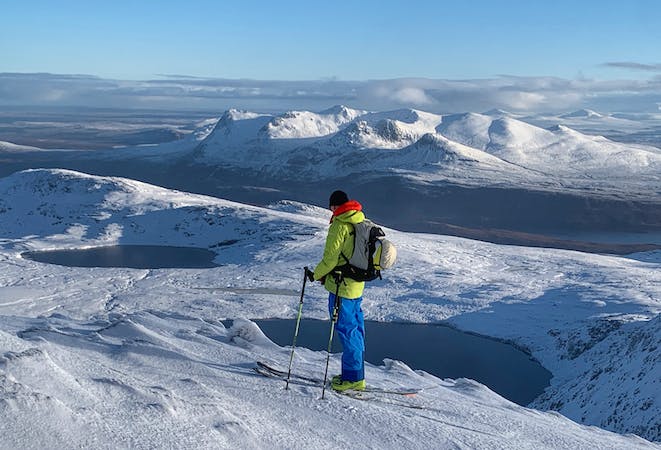