A short pedal leads to incredible views from the Continental Divide.

Unlike some other mountain passes in the region, Old Monarch Pass doesn’t see any proper snow grooming during the wintertime. However, thanks to its ultra-easy access directly off the paved and maintained Monarch Pass (US Highway 50), Old Monarch Pass Road receives enough traffic from backcountry skiers, cross country skiers, snowshoers, and most important of all—snowmobiles—that it is often fully packed the day after a big snowstorm. This traffic packing allows Old Monarch Pass to provide some of the best fat biking conditions in the Arkansas Valley!

The route as mapped here only measures a mere 2.6 miles from the pavement to the top of the pass and back down. This short distance makes it a low-commitment ride, which might really appeal to the uninitiated. It still isn’t the easiest of fat bike rides, however, with almost 400 feet of elevation gain in that 1.3-mile climb. Like you’ve no doubt come to expect with fat biking, if the conditions are good, that amount of elevation gain is gravy—just gear down and pedal. If the conditions are bad, well… maybe try again another day.

Despite being such a short ride, the payoff from this quick pedal is immense! At the top of the pass, you’ll have reached the Continental Divide at 11,375 feet above sea level. The views to the west from the Divide are immense, and even the views of the mountain peaks to the east—most notably Aetna—are also camera-worthy. If you own a set of lights and pack a few extra layers, consider taking in the sunset from the top of the Divide. It’s a marvelous site at any time of the year, but especially in winter when no one else is around, it’s magical.

The snowmobile traffic tends to begin at the pavement, then go up and over the top and down the backside of Old Monarch Pass. Thus, in theory, you could very well ride down the backside of the pass for a longer pedal. However, know that you’ll need to grind back up and over to return to your car, and it’s often difficult to judge how challenging or time consuming a fat bike climb will take, even if you’ve ridden down that same stretch of road. I’d strongly advise against it. If you decide you want to ride the west side of Old Monarch Pass, I’d recommend driving over Monarch Pass, turning right at the sign for White Pine, and driving to the base of the western side of the snowmobile route and beginning there. 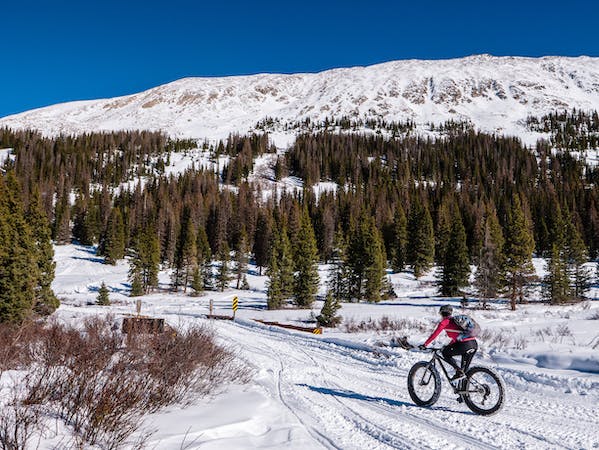