Despite being off the beaten path, this rocky desert mountain bike playground is quickly becoming a mini mountain bike destination.

Penitente Canyon is best-known as a sport climbing hotspot. With routes ranging from easy to difficult, the rock climbing access here is easy and the canyon is simply stunning.

However, Penitente is quickly becoming known for a totally different aspect: it’s trail system. While mountain bikers aren’t allowed to ride through the bottom of Penitente Canyon (except during the annual 12 Hours of Penitence race), the trail network spreads out around the canyon proper, running through smaller canyons and making excellent use of the unique geology of the area.

Most of the trails range from upper intermediate to advanced difficulty… if you stick to the main trail tread. Thanks to the multitude of bedrock protrusions jutting out from the meager film of dirt spread over the earth’s surface, alternate lines and much more challenging rock features abound in this area. Add in a jaunt up onto a knife-edge rock, or drop into a near-vertical rock roll feature.

The environment here is unequivocally high desert, meaning it offers superb weather and plenty of sunshine in the spring and fall. During the winter, the San Luis Valley actually gets bitter-cold due to inversion from the towering mountains, so during mid-winter Penitente isn’t a great choice. Similarly, the fall is blazing-hot, with temperatures often breaking 100 degrees.

The Sunshine Kitty to Rock Drops Loop, mapped here, packs the most entertainment into a relatively short number of miles in the Penitente Area. The 12 Hours of Penitence loop is much longer, but overall that added length doesn’t provide the same caliber of singletrack as this short loop.

If you enjoy chunky, techy trails—this loop is for you! The climbing is all manageable, despite rock slab climbs and a few tough up-and-over features. Along the way, beautiful vistas of Penitente’s unique rocks and more minor canyons unfold below you.

Once it comes time to turn down, open up the suspension and get ready to rail! The “Rock Drops” trail is aptly named, with a cascading series of ledge drops—most of which can be rolled, some of which can’t. If you want more challenge, keep an eye out for the various alternate lines—but be sure to scope the more difficult ones first before you drop in!

Thanks to a well-developed campground right at the trailhead and entrance to the canyon, Penitente is quickly becoming a mini mountain bike destination in its own right. Over the coming years, it will only continue to get better: many more trails are already being flagged and planned! 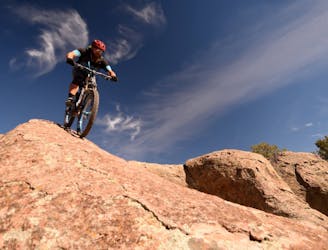 A short but sweet sampling of Penitente mountain biking.