A surprisingly challenging, rock-strewn slice of old-school singletrack carved into the limestone river bluffs and rich clay soil that are the hallmarks of Kansas City.

Be prepared to be surprised.

A lot of people would be shocked to find what locals and visitors alike consider to be top-notch singletrack in Kansas City. Thing is, while the rest of the world was out getting noticed, the local trail builders were quietly carving some chunky goodness out of the limestone and clay that makes up Kansas City’s terra firma.

The Blue River Parkway Trails may be the oldest trail system in Kansas City. And while young compared to the CCC trails out west, BRP (as it’s known locally), has had 30 years to be trimmed, fine-tuned, and coaxed into a beautiful version of a rocky, technical beat down.

There’s not much elevation here but the locals have figured out how to maximize the punishment and joy out of each trip from bottom to top and back down again. Max elevation change is only 100 feet but you’ll do it enough times in short bursts – all while fighting rocks and roots over and over – that a 20-mile ride will feel like far more. Depending on how you ride it, you can end up climbing 1,000 feet roughly every 10 miles.

It’s approximately 23 miles of threading your bars through trees, dancing over sharp, stair-step limestone, and crisscrossing tree roots determined to take your wheels out from under you.

The soil is largely clay that turns to hard pack (emphasis on hard) during the dry, hot summers. That means rain turns the trails to a thick, peanut buttery goop which can take several days to dry.

During summer you need to be aware of temps that can hit close to 100 with humidity so thick it’s like trying to breathe through a hot, wet towel. Of course, there is poison ivy, mosquitoes, ticks and spiders during the summer, the latter of which build their webs across the trails.

If it sounds like a place you’d rather avoid, do yourself a favor and don’t. The locals do a good job of keeping it trimmed back (mostly), which makes a huge difference with poison ivy and ticks. If you go anytime during July or August and it’s after, say, 7 AM, chances are the spiders will be cleared. And then you can marvel in how much work you have to do to zig zag through thick tree stands, jaggy limestone scattered randomly, and an unrelenting roller coaster of small ups and downs. There’s also a burgeoning flow-ride scene happening with some gaps, structures, and big berms to sweep through. Though keep in mind you’ll never be covering much ground top to bottom.

Of course, that’s not why you ride Kansas City trails. This is where you come to ride singletrack that brings the machine gun style punishment at you until you just can't go any further. It's tough, but you'll leave smiling. 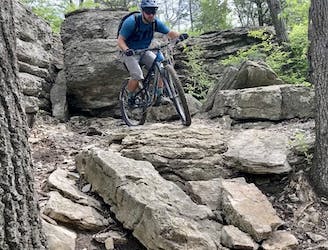