Winter route to the summit of one of Washington's most iconic mountains.

Following its eruption in 1980, Mount Saint Helens lost over 1,000 feet of its elevation profile, resulting in its current horseshoe shape. With an active lava dome regrowing inside the crater, this has resulted in St. Helens being the easiest of the Washington volcanoes to summit and simultaneously one of the most strikingly beautiful and rewarding.

Because of its popularity, a daily quota system is in place for climbing permits between April 1st and October 31st. The summer route begins at the Climber's Bivouac and is basically a hike through rock and pumice.

The standard winter route, the Worm Flows, starts at the Marble Mountain sno-park. While this route is longer, because it is almost entirely on snow, it is more aesthetically appealing, though it does require snow scrambling expertise with an ice ax and potentially crampons.

The crater rim is breathtaking, but stay back from the edge as it typically has dangerous cornices. Ski descents from Saint Helens are popular, as is glissading for those in boots or snowshoes. 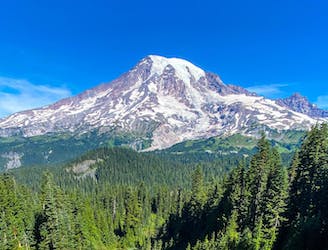