A trail run oozing with culture & history: the ultimate tour of Salzburg

Steeped in medieval history, this run follows trails up the two hills flanking the Baroque architecture of Salzburg’s Old Town (Altstadt). One moment you’re gazing up at 18th century churches, the next – floating over roots on shadowed single trail before landing at the base of yet another Castle.

Lying on the right side of the river Salzach, climb the cobbled streets that morph into meandering single trail, leading up to the height of Kapuzinerberg at 640 meters. Here, you’ll reach the 16th century Franziski-Schlössl – the first of a handful of castles you’ll pass on the round – and can either keep running down the other side towards Gaisberg for big vertical metres or continue on the mapped route, which drops to the right and shoulders the ancient walls that encompass three sides of the mountain, dating back 400 years.

Time it right and you might meet one of the resident Chamois on the trails. If not, there’s still plenty to see. As you return to the beginning of the first loop, stop for a breath or two to soak up the brilliant view of Salzburg and it’s eye-catching green copper domes dotted throughout the city.

Descend into a maize of stairs and gothic streets before crossing the Salzach for the next climb. Marvel as you pass through the Altstadt and by the Nonnberg Abbey – the oldest continually existing nunnery in the German speaking world, made famous for it’s postulant – Maria von Trapp in the Sound of Music. Then it’s back up again, passing the 11th century fortress of Hohensalzburg, one of the largest medieval fortresses in Europe. Continue along to Mönchsberg for the final four castles and more beautiful views of the city that can be seen from the forested single trails. Other highlights on the route include the Buddhist stupa and the Museum of Modern Art – you can’t miss it with the giant silver camels head at the entrance.

Once you’ve finished the loops, stroll into Old Town. Salzburg boasts some delicious ice creameries and you deserve it! 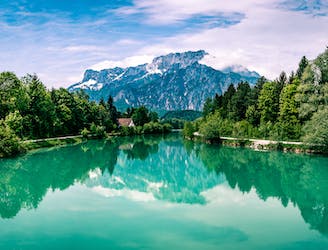 A trail that will make you feel like singing "the hills are alive!" as you reach the peak