Little Tour either bootpack or skinning - quite long descent

Krahbergzinken is the first peak towards the backcountry seen from Planai and is regularly skinned up by locals, which means that there normally is a nice skinning track. It will take you approximately an hour to bootpack up and roughly 45 minutes to skin up.

In the beginning you hike or skin through a couple of trees and just keep going up the north face, it's not a regular ascent, as the terrain has some steps and you will only see the cross on the summit for the last couple of meters. Bootpacking is normally working best on the more eastern side of the face, as the wind blows the snow away and makes climbing conditions easier.

For the descent you have a couple of possibilities. The most exciting is the couloir from the summit, which is a kind of very wide hourglass couloir with a narrow part in the middle. You drop in from the peak or put your skis on a couple of meters down and drop in there. Beware of the wind lip when dropping in; the exact entry point will vary year to year. If the snow cover is really stable there are also possibilities to drop into the first part of the couloir from the rider's left. To get through the narrow section, you have to keep left of the central rock, which is especially important when there is less snow. The lower part is just cruising down, there are some bumps and wind lips as well as small bushes. Beware of the terrain trap - there is a 5 metre deep ditch at the bottom of the whole thing - so the snow conditions really have to be safe, as already a small slide can be disastrous due to the terrain.

The most common descent is more or less following the skintrack down again, which might sound boring, but as the face is quite wide and there are some great powder turns to be had and the view is amazing. If there is bad weather, following the skintrack back down is the only option. If you want to spice your descent up a little bit, you can ski riders right over the ridge.

That's also the third possibility: Ski the first couple of meters down the skinning track and then turn skier's right. As the face is structured and there are some cliff bands as well as trees, you definitely need to do a face-check beforehand. You can also check out the snowpack if you do another run before you start hiking if you turn right from the slope and traverse in from a safe distance to the face. The first and second couloirs, counted from the slope, sometimes release massive slides and also can have wind lips on the top and a tricky rolling entrance, which makes them somewhat unsafe. If you ski them beware of people traversing in underneath.

When you come down the couloir from the summit, you can have the option of a very nice tree run down to the connection between Hauser Kaibling and Planai. To do that, instead of following the descending valley towards skiers left and the slope from Mitterhausbahn, you turn skier's right. To get out of the valley, you have to have some speed and might need to use your poles or unstrap one foot if on a snowboard. In the forest there are many possibilities, and you can't get it super wrong, as you will always get down to the slope but there are favourable and less favourable options. The best option is to follow the patches of cut forest down. If you turn too much towards skier's left, you might end up underneath the chairlift Sonneckbahn, which is not too bad either. In any case be sure that there is a sufficient snow cover down to the valley. 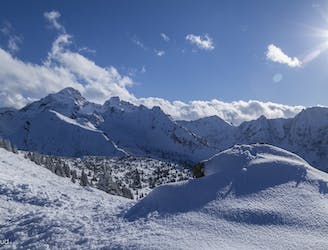