One of the most celebrated ski descents in Canada through some huge terrain.

This line represents a landmark in the career of most skiers and while fat skis and airbags have encouraged more and more people to take on big mountain faces, "doing the dive" remains as serious as it ever was. Treat this one with respect, ski it when conditions are right and you are in for a treat.

Ride the Great Divide Express chairlift up to just below the summit of Brewster Rock/Lookout Mountain. At the top of of the chairlift is a gate which can only be opened by a turned-on avalanche transceiver. As well as needing your transceiver you need a ski partner, a shovel and a probe, without which ski patrol will prevent you from going through the gate.

Provided you have a ski partner and are correctly equipped, go through the gate and make the 5 minute hike up to Lookout Mountain. From the summit of the mountain there are various entrances to Delirium, the steepest of which is the appropriately named "X-Drive".

The line shown here is known as "Dive Proper" and is considered the easiest route down the face, all things being relative of course. It is reached by following a metal staircase down from Lookout Mountain to a small col, where you can don skis and start your descent.

The skiing is steep and exciting, and the excitement is only increased by the fact that you feel as if you are hanging above the main Sunshine ski area on a face you will likely have stared at many times before.

Keep concentrating all the way down because even when the terrain mellows out you are still in serious mountains where avalanche danger exists.

There are various ways out of the bowl below Delirium including going straight down to the green and blue pistes fall line from the route, or by doing what the line here does and traversing across to the Hayes Hill Trees and down to the Eagle Creek black piste.

Locals have been known to do 8 laps down "The Dive" in a day but most skiers content themselves with one lap followed by a toast in a mountain restaurant! 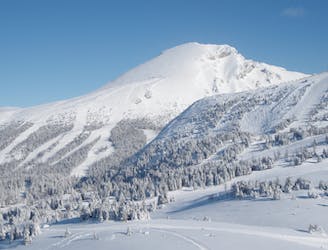