From the trailhead at Thomas' cafe, head towards the summer trail which meanders through the wet forest. After around an hour, one reaches the treeline and the ancient remains of the old ski hut of La Picada.

From the hut, the route is pretty straightforward, aiming directly towards the summit.

Once skinning, the volcano may be steep and icy, so be prepared for multiple skin-boot- crampon transitions throughout the day. The route has few protected areas to avoid the wind, so bring a puffy, always.

When nearing the 2000 m mark, the flanks of the volcano increase in steepness, requiring crampons and ice axes.

The final portion of the route is the most tricky. There are hidden crevasses under the the snow that blows over from the other faces, so be prepared to rope up and belay your partners.

As opposed to the normal west route, it is usually possible to ski directly off the summit, although be prepared to ski sastrugi and rime. Follow your ascent route carefully, in order to avoid falling into the deadly crevasses near the summit.

The descent provides incredible views of the Puntiagudo, Tronador and Puyehue Volcanoes, and is strongly recommend as a spring tour, preferably during October and November. 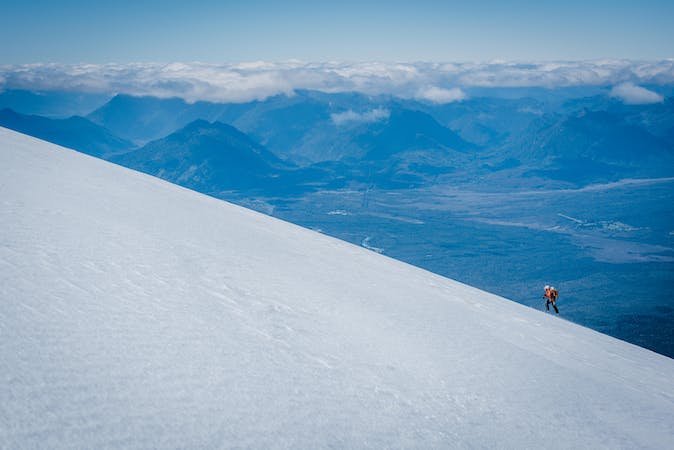 A Trio of Epic Ski Tours in Chile's Lake District