A short day, with multiple options, passing through the historic col which Hannibal crossed with his elephants.

This is a short day and we chose this route to avoid dropping down to Bramans, hence avoiding lots of walking, carrying skis, to Termignon. If you are very early season, or it is particularly snowy, then dropping down there could be an easy option, then skinning up the valley floor to Termignon. If this was the case you could easily link through to our following day, which heads N through the Vanoise to Tignes, either staying there (very expensive) or staying in the lovely Refuge de la Leisse. We chose to take a low line, skirting the Lac de Mont Cenis. Alternative options which would give more skiing would be Col de Sollières or, perhaps the best skiing of all, Pas de la Beccia. This latter option would be a steep climb to the col, probably on crampons in the early morning, but leads to a facing bowl, that should be an excellent ski.

Leaving the Suffet Hut we attempted to find the ski line marked on the IGN maps, which proved to be a time-consuming steep bushwhack and completely un-obvious. This involved crossing the Ambin river, using the bridge some way E of the hut. I don’t recommend this, but suggest instead crossing the river by the bridge next to the hut, then attempting to follow the summer trail.

Find your way through the steep ground, doubling back on yourself at about 2140m. Above here it is much easier. Pass by some information boards about the lake and the pass itself, and about Hannibal’s supposed crossing with his elephants a long time ago. From the far side of the lake, near the Lanslebourg lifts, take the traversing track that heads W, gaining height initially, eventually to the top of the Roches Blanches chairlift, then down the pistes to Termignon. 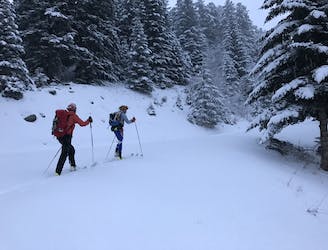 A safe option for crossing the Vanoise, avoiding as much steep ground as possible