3 Neukölln parks with an interesting history and unusual character. If you are training for a longer race or just really want to stretch your legs and get to know the greener parts of Neukölln, this point-to-point is for you.

Let’s start with the illustrious Körnerpark, which can be easily reached from the Neukölln S-Bahn end of Karl-Marx Straße. Tucked behind big concrete housing lies a Neo-Baroque manicured garden, complete with water feature, gallery, and lemon-themed cafe, providing its local residents with an elegant oasis of calm. Find out more about the park’s history here: http://lolamag.de/feature/places/berlins-green-spaces-kornerpark/

Run from the water feature along the lawn to the old villa and up the steps at the far end onto Tomasstaße. Follow the road up to Hermannstraße, cross over, and you will come to the entrance of Tempelhofer Feld on the other side. A tree-lined avenue opens out into the vast disused runway. Originally built by the Nazis in 1936, in the Cold War it was the site where supplies were flown into West Berlin during the Berlin Blockade, and in 2015 its hangers were used as temporary shelters for nearly 2500 refugees. For more information on Tempelhofer Feld’s history, visit: https://www.washingtonpost.com/world/inside-an-enormous-abandoned-airport-in-berlin-thats-coming-back-to-life/2018/03/16/65ca90a6-2642-11e8-b79d-f3d931db7f68story.html

Since the airport’s closure in 2008, and the city’s vote to preserve it as a public space in 2015, Tempelhofer Feld has been enjoyed by rollerbladers on the runway, kids playing in the garden, BBQers, cricketers, yogis, musicians, and of course runners. The paved loop around the perimeter of the airport is 6km in total. Run clockwise on this path, passing the airport building at the far end on your right, and then just past the baseball field and the toilets, take the Columbiadamm park exit on your left. Cross the main road Columbiadamm and enter the gate into Volkspark Hassenheide on the other side of the road.

Hassenheide (“Rabbit Warren”) was originally a shooting range for the Great Elector in the 1600s and remodeled by the National Socialists for the 1936 Olympic games. Amongst the sweeping lawns, ornate rose garden, petting zoo, a small lake, and tall oaks, you’ll spot a monument to the founder of the German gymnastic movement, Friedrich Ludwig Jahn, and a sculpture commemorating “The Debris Women” who were responsible for cleaning up Berlin after WWII. Hassenheide also has a 69-metre hill formed by a pile of rubble left over from the war, one of the few hills in the notoriously flat city. It’s a great, secluded green space where runners can practice their hill climbs and get the feeling of being far away from the busy roads and bustling, concrete city.

The Volkspark Hassenheide leg of this route is around a 2.5km lap of the park. After entering Volkspark Hassenheide from Columbiadamm, head towards the Hasenschäanke cafe, which you will find in the centre of the park next to the natural theatre and fairytale playground. Head in a westerly direction for 300m before turning right onto the main path, which will take you past the petting zoo and around the perimeter of the park, then right up the hill before rejoining the outer path. Leave the park via the Hassenheide exit, which is conveniently close to Hermannplatz U-Bahn station. The Hassenheide section of the route is inspired by the Park Run course. Every Saturday morning at 9 am Hassenheide hosts the popular and free 5km Parkrun- find out more here: https://www.parkrun.com.de/hasenheide/. 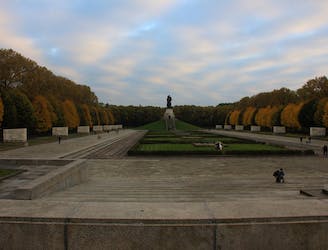 Discover the wonders of Treptower Park—from the iconic abandoned theme park to the immense Russian Memorial. 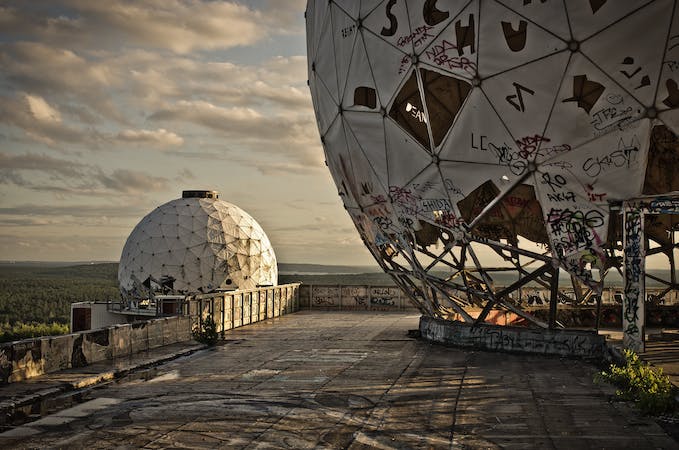 A Run Through Berlin's History