Of the 4 regularly hiked trails on Fuji, this is the 2nd most popular (behind the Yoshida route) and the shortest, because it starts from the highest altitude (2400 metres). The trail is generally quite steep and rocky but it is considered to be the quickest way of climbing the mountain, and is usually done in about 8 - 10 hours roundtrip.

As with the other routes on Fuji there are mountain huts along the way so that you can break up the ascent if you choose, thereby arriving on the summit at dawn. However, while there are 20 or so huts on the Yoshida route, this one "only" has about half a dozen. One thing to bear in mind when making your plans is that the sunrise for which Fuji is famous can't be seen from this route, so (unlike on some of the other routes) if you get your timing wrong, you will miss big moment! If in doubt, be early!

The route starts at the Fujinomiya 5th station, which has a shop and a restaurant where you can stock up on last minute supplies or grab a bite to eat. The station is the easiest to access of all the Fuji stations if you're coming from western Japan and can be accessed from Tokyo and Osaka, albeit with a little more difficulty than the Yoshida route.

Once you get hiking the trail doesn't let up much, but that does at least mean that it's efficient! The trail goes up and down the same way, so be aware when climbing up that there will be a steady stream of hikers descending from the summit. In theory descending hikers should give way to those on the way up, but take a look at the person coming down and judge how tired they look before demanding they give way!

Upon arriving at the summit crater, the highest point is close by, but there is the option to go all the way around the crater. This is highly recommended and takes about 90 minutes. Descend by the same route, giving way to those heading up to repeat your summit success! 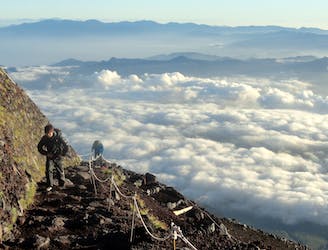 This route faces directly into the sunrises for which Fuji is famous and as such is the most popular route to the summit.