Mt Ardmore is a great one-day hit, with the possibility for skis on from the car if snow conditions allow.

Accessible straight from the Lilybank Road during the height of the winter season, Mt Ardmore is a great way to keep away from the busy ski resorts for a single day hit.

All of the slopes down the west face are steep and prone to avalanche, so making sure that you have stable snow conditions is imperative on this face as all the bowls funnel into fairly tight couloirs lower down in the face, causing you to get dragged through some unavoidable terrain in the event of an avalanche at the top.

Starting from the Lilybank Road, attach your skins to your skis and ski tour in an easterly direction towards Mt Ardmore, across the long flats to reach the base of Mt Ardmore. It’s easiest to ascend on its southern back via the ridge or the more shallow gullies on this side of the mountain.

Ski tour up to the south ridge of Mt Ardmore, which will then allow an easy ascent up to the summit, which gives some of the best views of Lake Tekapo in the region, completely uninterrupted by any masses of punters or machinery, like neighbouring Mt Dobson & Roundhill.

From the summit, you can take many of the wide gullies that flank the west face, all the way down to the flats that lead back to the Lilybank Road - do make sure you get a good look up at these gullies to choose which one you want to ski before dropping into it, to make sure it’s complete with no rocky steps.

You can also retrace your steps to ski the mellow terrain that you ski toured up. This also gives a fantastic position to ski in, being able to slash turns with Lake Tekapo reflecting the Mount Cook Massif ahead of you - amazing! 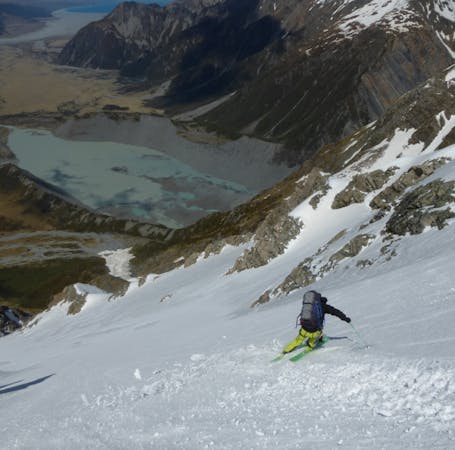