Soho Basin began as a heliski location on the backside of Cardronna Resort. This land has now been sold to a cat skiing operation, where they provide mechanically assisted off-piste, complete with BBQ and beers.

However, the land owners allow access for skier tourers who have stated their intentions via email, so drop mark@sohobasin.co.nz an email letting him know you’re planning to ski there, how many are in your group and your expected time back.

Soho Basin has a host of descents possible, we’ve just shown one route possible in this region, play about with the terrain yourself and find your own route down this beautiful trio of bowls – you’ll have time for multiple laps due to the ease of accessibility here so go explore!

Just as you come to the top Cardronna carpark, make the first left and you’ll see a large garage ahead of you – these are the Soho Basin buildings.

Out of respect to the land owners, it’s probably best to park in the Cardronna carpark and walk down to this building to put you skins on.

Once you’ve got your skins on, ascend in a north westerly direction, following the ridgeline all the way up. You’ll be alongside one of the Cardrona pistes as you skin up this Ridgeline, but it’s at the point where the track departs from the piste, where you can drop down into the bowls.

Pick you line down as far as the snow line will take you, to then take the tracks made by the cat ski machines to head back up for another lap, perfect! 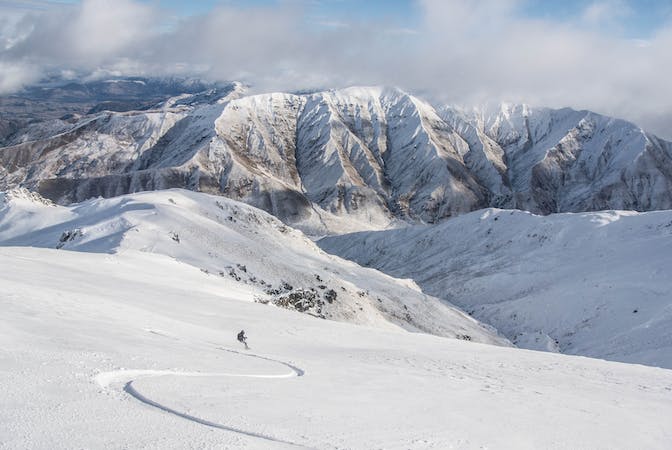