Often combined with an ascent and descent of neighbouring peak Burstinden (753m), the 862m high Roalden is a very alpine and classic Senja mountain that holds good snow late in the season. Its prominent north faced rock walls give a true alpine feel to the area around Senjahopen. The approach and ascent from the small fishing village is especially remarkable when done in the late afternoon sunlight in late spring.

From Roalden, you also have the potential to combine even more summits on one day, including Store Hesten and Lillehesten.

Start the tour in Senjahopen and ascend under the mighty and very steep rocky faces between Burstinden and Roalden. From the cemetery, head towards the ridge formation that leads up to the col between the two mountains. As you ascend, the views over the small fishing villages get better and better, and the overall ambiance under the beautiful peaks truly stands out.

From the col at about 632m, either ascend SW towards Roalden by following the obvious ridge line.

The ridge is airy and sometimes ski crampons (or regular crampons) come handy if the snow is hard. Cornices are often formed so make sure to keep a good distance to the edge. The ascent line is usually skied back down often offering some amazing turns down towards the col. The snow often stays good late in the season here.

Alternatives The skier looking for a longer and steeper alternative of descent line can ski down the south face. It provides some great terrain but the return is long. To avoid returning by steep terrain in the afternoon if you decide to ski down the S face, the safest route leading back to the col at 632m goes by Snaufjellet and Burstindvatnet. See the map as the route is not described here.

After skiing Roalden, regain the col at 632m ascend the ridge E/NE to the point 667m in the direction of Burstinden. Then descend to 581m, a small col under Burstinden SW face that finally leads to the summit.

The Burstinden SW face is a lovely ski face. Touched by the sun, it softens through the day. Time it well to get a safe ascent and good smooth skiing on the way down if you are here in the spring.

In the spring it is often a good idea to bring ski crampons. From the summit you can decide to ski all the way down to the lake Burstindvatnet before hiking back up.

Once up at the col between Roalden and Burstinden, the views over Store Hesten and Lille Hesten mountains are inviting and offer exciting link up possibilities for the fit skier who wants to fill the day with vertical meters. You can make interesting loops combining several peaks here including Roalden, Burstinden, Lille hesten, Storehesten, Snaufjellet, Tverrfjellet and many more of the smaller peaks. If using 2 cars, it is possible to park one car on the normal ascent parking to Store Hesten, South of Kvalvika. Or start the day here and end in Senjahopen. 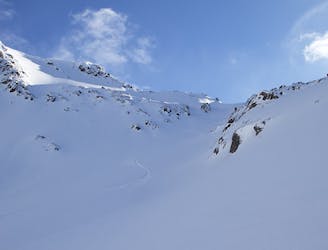 An exciting and alpine ski tour with potential for several summit link-ups. 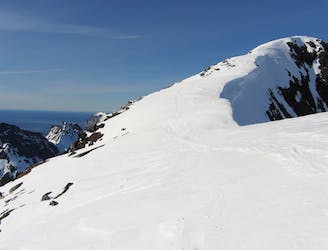 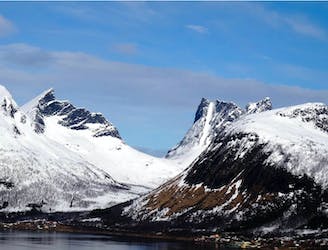 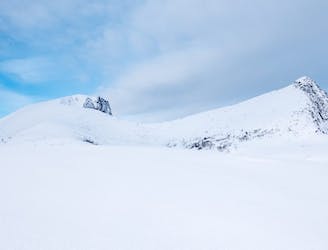 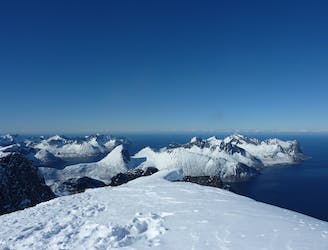 A great choice both for the ski quality and the outstanding summit views! 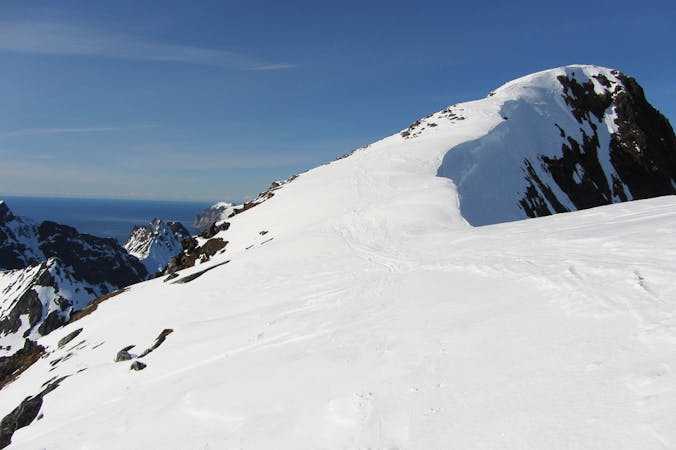