Stunning waterfalls and breathtaking views in the Northern Dales.

It takes a while to get there, but you’ll discover pretty quickly why Cautley Spout is more than worth the miles under your feet, and the sore legs, on this bracing circular walk.

The Spout is England’s highest cascading waterfall, as Cautley Holme Beck travels some 200 metres down the fells to create a view that surpasses your efforts.

The cascade was formed when glaciers retreated into the mountain to effectively force a stream over the edge of the huge Cautley Cragg.

While you can walk to the Spout direct from the small village of Cautley, that would be boring with such a varied landscape to explore. The best way to take in its splendour is from Sedbergh.

Turning left when you leave the Yorkshire Dales National Park’s car park in the centre of the town, you join Long Lane before your route passes through Thorns Lane, Underbank, and Ellerthwaite.

This soon becomes a green lane with the River Rawthey on your right and, further along, beautiful, if somewhat brief, waterfalls. The length of the walk can test your mental strength – and staying power – as you hug the side of a rising hill before seemingly losing height for an eternity as you descend.

But soon, you will see Cautley Cragg rising, and the trickle of the waterfall in the distance. This is where this walk comes into its own, the magnitude of the scene unfolding in front of you with each step.

The waterfall could be miles away and part of you wants to run to it, but you just cannot fail to slow to a stroll so your senses can take in the natural beauty before you.

At this point, you’ve only done half the job. Scrambling up the right of the waterfall is a quad tester in itself but the views from The Calf, the meander back to Sedbergh, and a well-earned drink make up for it. 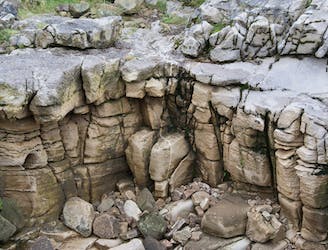 Discover the world beneath your feet—by walking above ground!