Ennerdale is the 'wildest' major valley in the Lake District, and this horseshoe takes in practically every top on its convoluted skyline to give a long, challenging classic.

The fells visited on this route include some of England's finest, including High Stile, Hay Stacks (isn't this supposed to have been Wainwright's favourite?), Great Gable (the clue's in the name), the massive Pillar and wee Steeple - among the most dramatic of Lakeland summits. This makes a tough single day for fell running types, or a brilliant weekender with a wild camp somewhere en route.Ennerdale is the site of an ambitious wild land restoration project which includes managing the dale's extensive old pine plantations to bring in a more natural mix of woodland.

The public road ends at Bowness Knott car park, and from here it continues as a vehicle track to give access to Ennerdale's field centre and two YHAs (see Accommodation). Follow the track downhill to Ennerdale Water then along the wooded shoreline (great views of Pillar and Steeple across the lake). Beyond the head of the lake pass the field centre, and then one of the YHAs. A couple of hundred metres further on look out for a gated path on the left, at a break in the woods. This leads uphill quite steadily, crossing a beck and making the long climb onto Red Pike.

This is effectively only a minor top of High Stile, but it offers a great outlook over Buttermere to the north western fells. From here follow the rim of the cove onto the summit of High Stile itself, one of the great Lakeland hills with its airy outlook and classic crags. The high point is set a little northeast of the main lay of the ridge. A well-trodden path now follows the tops of Eagle and Comb crags to the summit of High Crag. Beyond this is a steep descent on scree; thankfully a short way down an engineered path emerges, leading onto the broad grassy saddle below. Pass over the little lump of Seat to reach Scarth Gap Pass, a famous through-route connecting Buttermere with Ennerdale. This is the low point of the skyline circuit.

Continuing with the skyline, a rough path with some very minor scrambling winds uphill through the scattered outcrops of Hay Stacks. This little fell is a wonderland of rocky knolls and heathery hollows, scattered with tiny tarns. There is a choice of routes going over Hay Stacks, and if it's misty some fun with a compass might be required. Follow the high ground more or less overlooking Ennerdale. Eventually a fence is met, leading to a boggy hollow at the top of Loft Beck. From here a choice of several paths lead up grassy slopes onto Brandreth.

Descend over the wide saddle of Gillercomb Head before ascending the well-used, heavily-cairned path onto Green Gable, a little summit with a big view of its parent fell Great Gable. Descend into the pronounced notch of Windy Gap (it's well named in my experience), then continue on the steep, rubbly path up the northeast flank of Great Gable. The broad summit dome can be a little confusing in mist; by the summit cairn is a memorial plaque to members of the Fell and Rock Climbing Club killed in the (not so) Great War.

Head roughly northwest to pick up the path descending the steep northwest spur - rocky, but only very moderately scrambly. Don't be tempted by the promise of a path to the left of this route - it's nasty scree. From the saddle of Beck Head with its little pools continue roughly west up the rubbly path onto Kirk Fell. On top it's a wide grassy plateau with two separate summits; a line of old fence posts leads over the east top and past Kirkfell tarn to the slightly higher west summit.

From the main top the fence posts lead on towards Kirkfell Crags. Here the ground abruptly steepens and the path gets quite rough and rocky underfoot, weaving through outcrops down to the grassy col of Black Sail Pass, another of those through-routes (in this case connecting Ennerdale to Wasdale). The east ridge of Pillar now gives a long and largely pretty easy ascent with one steep bit in the middle; stay close to the edge for the eagle's-eye views over the mountain's spectacular north face to the forested trench of Ennerdale. There's a stone walled wind break and trig point on top.

A path down the northwest spur (White Pike) gives the quickest return to Ennerdale. But to continue the skyline circuit go southwest instead, following a trail down into Wind Gap. From here stay with the ridge crest in fine style over Black Crag, and on up to the level, grassy top of Scoat Fell, where a drystone wall is met. Towards the west end of the summit plateau cut right, where a cairn marks the drop-off for Steeple. A short, narrow, rocky ridge leads onto this sharp top - a rarity in the Lakes where few summits are properly peaky. A path then leads on down the north ridge; there's no scrambling but it's fantastic stuff anyway, with Ennerdale stretched out below. On the heathery lower slopes ignore a turnoff and stay east of Low Beck to cross a stile into the woods. The path, boggy in places, leads down through the trees beside the cascades of Low Beck to meet a forest track in the floor of Ennerdale. Head west on this through stands of mature pines, crossing a new wooden bridge over Woundell Beck and a little further on a chunky concrete bridge over the River Liza to regain the track back to Bowness Knott.

The Round of Gasgale Gill 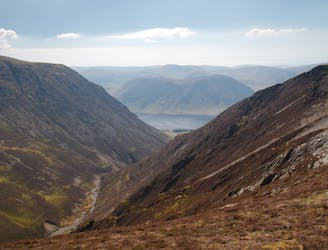 This round which tackles the hills enclosing secretive Gasgale Gill is perfect for a shorter day, and after an inauspicious start rewards baggers with three Wainwrights building to a fine climax with a traverse of one of the best walker’s ridges in the entire national park.