With its architectural rock scenery and endlessly varied ground this lap of Cwm Bochlwyd has to be the best low-grade hands-on route in Wales. The circuit covers all the main highlights of the central Glyderau: a full scrambling traverse of Tryfan via its north and south ridges; the alpine-esque clambering on Bristly Ridge; the high mountain moonscapes of Glyders Fach and Fawr; monumental rock features like The Cantilever and Castell y Gwynt; and the scrambly crest of Y Gribin ridge.

Go through a gate and climb a steep path by a drystone wall, bearing left on rough ground beneath the rambling east walls of the Milestone Buttress to reach the lowest shoulder of the North Ridge. From here it's go-anywhere scrambling ground up the broad, complex ridge; signs of wear indicate the easiest options. The first notable feature is a quartzy terrace; just to the right is a block known as The Cannon (easily missed). If necessary the next scrambly section can be largely avoided to the left, and above this is a second obvious terrace. Passing left of a prominent spike reminiscent of The Cannon, a polished scramble then leads onto a minor summit; climb down from this into a little gap. A direct ascent out of this gap is grade 2, while an easier line slants right to gain a gully which leads to Tryfan’s North Summit. Beyond a rock-strewn saddle is the main Central Summit, with its weird twin rocks Adam and Eve (which is whom?); it's traditional (but not compulsory) to stride from one to the other.

Beyond another gap is the rugged South Summit. From here carry on down the South Ridge, which is rocky but less scrambly than the north ridge. Beyond a little dip is the Far South Summit (with some easy scrambling if you take the crest direct). Now bear a little right down rough ground to gain a path that leads to a big trail junction at Bwlch Tryfan.

Bristly Ridge is now obvious above. The scramble can be avoided altogether by a path to its left, but that would be a wasted opportunity. Instead follow a crumby path beside a wall, then enter a scrappy gully (Sinister Gully). Climb this with care, and when it steepens trend a bit left to reach the crest of the ridge. In ascent this soon narrows, and the pinnacles to which the ridge owes its name are met. Climb over the first one head-on to reach a gap beyond. Pass just right of the next tower (the Great Pinnacle), then cut left through a little niche to regain the crest. The shattered rock ridge now leads more easily to the plateau of Glyder Fach. Bear right over the plateau with its scattered tors to reach the highest rocks. Nearby is the famous Cantilever, a balanced rock 'table' that has probably starred in thousands of novelty photos.

Continuing west the plateau begins to narrow towards Bwlch y Ddwy-Glyder, a pass between the two Glyders. A direct descent to the col is blocked by the curious gothic outburst of Castell y Gwynt (Castle of the Winds); while it is possible to loop left of this top its chaos of sharp spikes gives some fun scrambling, and shouldn't be missed. From the bwlch beyond, a well-worn trail leads onto Glyder Fawr.

Return towards Castell y Gwynt, then cut left to a levelling at the top of the Gribin Ridge. This descent route offers a choice of lines; either a rubbly path on the left flank or some airy-but-easy scrambling sticking directly to the crest - a miles better option, clearly. Below the rocky upper crest the ridge gets greener and wider. Cross a grassy area above the famous Cneifion Arête, then follow an obvious path down to a trail T-junction.

Go right here to the outflow of Llyn Bochlwyd. Cross the stream, then walk northeast to find a well-trodden path which descends past the Bochlwyd Buttress to meet the A5 not far west of the starting point. 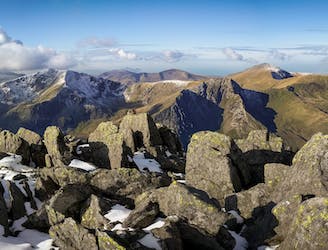 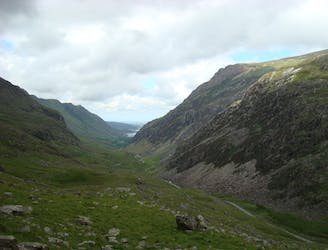 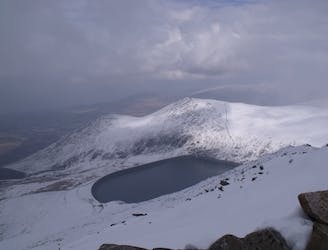 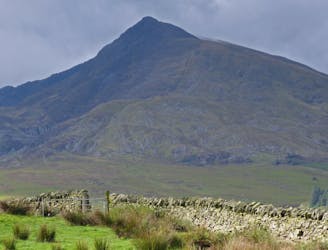 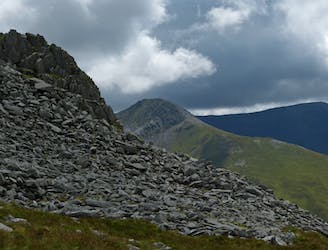 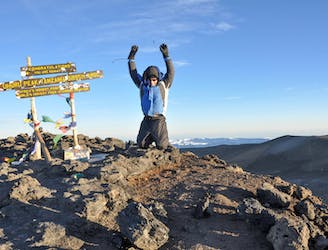 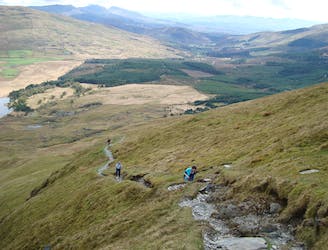